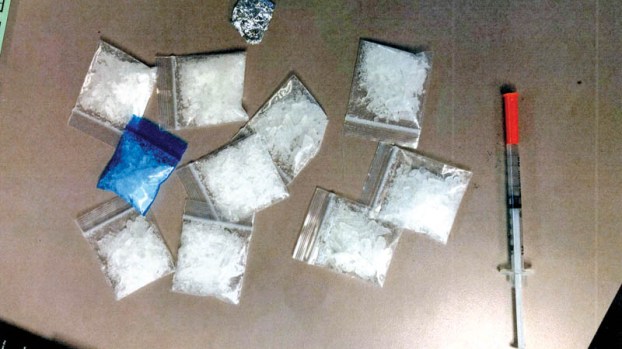 Evidence seized from a vehicle after a traffic stop on Saturday. Officers found 38.51 grams of crystal methamphetamine and a syringe loaded with liquid methamphetamine in a suitcase in the back of vehicle.

A call to the police about a possible impaired driver lead to Ironton Police officers netting nearly 40 grams of methamphetamine.

Around 11:30 p.m. on Saturday, a call was made about a vehicle driving erratically.

Patrol Officer Kersten Harris and K-9 handler Sgt. Brian Pauley, with K-9 Goose, initiated a traffic stop in the 600 block of Walnut Street. Officers found out the driver of the silver 2003 Trailblazer, Misty Robinson, had her license suspended and the passenger, Mitchell Robinson, did not have a valid driver’s license.

Goose alerted the officers to the scent of drugs in the vehicle.

She said the officers had the two step out of the vehicle and they saw small baggies with drug residue around the driver’s seat and door. So they continued their search and found a suitcase in the backseat that Mitchell Robinson claimed as his. “He opened it for the officers.”

Inside the suitcase was a syringe that field-tested positive for methamphetamine and 10 bags of crystal methamphetamine that weighed a total of 38.51 grams, which had a street value of $12,000.

K-9 Goose has been on the force for about four years.

“He is doing excellent, he has been very instrumental in our fight against drugs,” Wagner said

PEDRO — For those who enjoy using the many trails of Wayne National Forest, it has been announced that the... read more