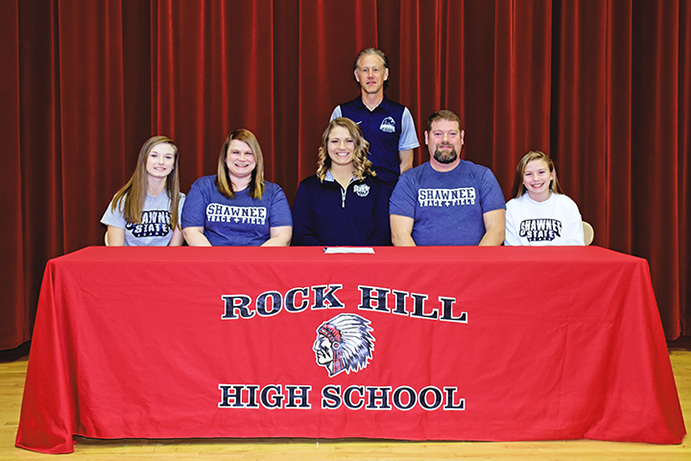 PEDRO — Maddie Scott might have some explorer in her DNA.
The Rock Hill Redwomen senior track standout moved from one school district to another, and when she arrived at her new destination she made a life-changing discovery.
“I moved here when I was a sophomore. Symmes Valley is where I went before and they didn’t have track,” said Scott.
“I was working out one day in the weight room and the track team was in there. I just started working out with them. I didn’t think I was going to do track. I liked (the track team members) and had a lot of fun with them. So, I did it and I was kind of good at it, so I said I guess I can do it. And then I really liked it a lot.”
Scott was not only good at it, she got to be good enough to get a scholarship offer from Shawnee State University and she signed to attend the school next fall and become part of the track program.
Scott throws the shot put and discus which were foreign objects to her prior to becoming part of the Rock Hill track team.
“I actually thought you threw a discus like you did a Frisbee. My teammates said, ‘No, Maddie, that’s wrong,’” said Scott.
New events await her at the college level, too. She was also told she would throw the hammer.
“I’ve never tried it before, so that could be fun,” said Scott with a laugh.
When Scott began to look at her college future she zeroed in on Shawnee State and the University of Rio Grande.
“I went to visit Rio Grande and it was nice. I just felt like Shawnee was better for me,” said Scott.
“I always thought about going there. Then when I realized I could do track there, I was like, ‘that sounds great.’”
Before she discovered track, Scott played basketball most of her life and continued playing through her senior year.
In basketball, Scott was named to the All-Ohio Valley Conference team as well as the Ohio Prep Sports Writers and District 13 Coaches All-Star teams.
Shawnee State’s head coach Eric Putnam likes the athleticism and potential he sees in Scott.
“We’re excited. She seems like a really good athlete,” said Putnam. “She’s a multi-sport athlete which we like.
“She hasn’t been super developed. We’re starting to get rolling and we have a good coach. She has a ton of potential to improve in college.”
Scott said she is anxious to work with a full-time throwing coach.
“I’ll have a throwing coach and hopefully that will help me out a lot,” she said.
Scott has not settled on a major but said she is leaning toward education.
Maddie is the daughter of Chad and Melanie Scott.

GOODYEAR, Ariz. (AP) — Homer Bailey wasn’t even thinking about opening day. After years of setbacks with his elbow, the... read more