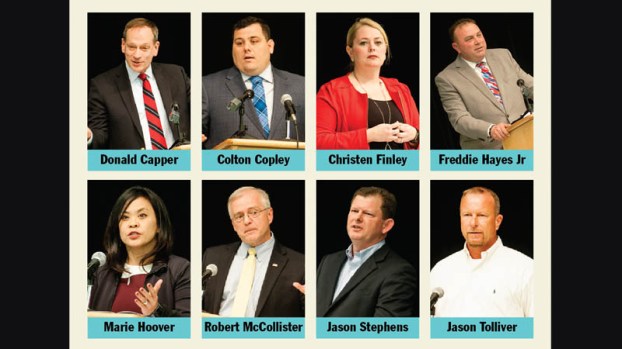 The Concerned Citizens of the Burlington Area hosted its annual Meet the Candidates night Thursday at Burlington Elementary School. Most of those running for office in Lawrence County this year participated.

BURLINGTON — Candidates for the May 8 primary election made their pitch to voters and answered questions on Thursday at the Meet the Candidates forum hosted by the Concerned Citizens of Burlington.

The event, which took place at Burlington Elementary, featured countywide and regional candidates and was the first of two scheduled for the year. It will be followed up by a general election forum in September.

The crowd first heard from the two candidates running for Lawrence County Common Pleas Judge to fill the seat being vacated by Charles Cooper, who has reached mandatory retirement age. Both candidates are unopposed in their party’s primary.

Lawrence County Municipal Judge Donald Capper, running as a Democrat, cited his 26 years of experience on the bench, beginning when he was appointed to the office after his predecessor, a Republican, died.

Capper, who was at the time the youngest judge in Ohio,  said he refused to replace the workers at the court with people from his own party, as was customary, and allowed the previous staff to stay on.

“I didn’t think that would be fair,” he said, stating he wanted to cooperate with people from across the political spectrum.

Capper spoke of his efforts to combine the county’s three adult probation offices and to establish treatment programs for those battling addiction.

“I’m excited about what is going on,” he said of Common Pleas Judge Andrew Ballard’s establishment of a drug court in the county. “I want to be a part of that.”

He also said he would work to solve the situation with the county jail, which does not have room to house prisoners.

On the Republican side, Christen Finley cited her 15 years of legal experience as a practicing attorney.

She said she was running because she “saw a need” for a candidate who met three criteria.

“A judge should be passionate about the people and residents of Lawrence County,” she said, citing her work with community groups, such as People for the Point, Habitat for Humanity and a special needs sportsmen program. Second, she said a judge should be “innovative.”

“We need a judge willing to change the way we do business in Lawrence County and do what is needed to move the county forward,” she said.

Third, she said a judge should be apolitical.

“We need a judge who refuses to let politics stand in the way of justice,” she said. “The biggest trouble, as I see it, is the attitude of ‘this is the way we’ve always done business in Lawrence County.’”

Incumbent Republican Commissioner Freddie Hayes Jr. said his favorite thing about the job is the service he provides to the community.

“I don’t do this job for the check,” he said. “I do it for the reward of helping others.”

He said he entered public service by taking a position on the Lawrence Water Board, of which he eventually became president and ran for 15 years before its sale to Hecla Water.

He also served on the board of the Lawrence County fair and also became its president.

He said one of his proudest accomplishments was getting funding for the Sybene-Chesapeake Senior Center, which was going to close after a funding levy had been voted down.

“They now have somewhere where they can get three meals a day,” he said. “They deserve it.”

He said he had been working with State Rep. Ryan Smith to get funding for a new facility for the seniors, to replace the modular unit at the Chesapeake Community Center.

And he said, on Wednesday night, he was informed that $1 million had been secured to build the center at the Lawrence County Fairgrounds, along with a new EMS station for Rome Township.

“That’s one more promise I made, and I delivered,” he said, adding that his fellow commissioners had also helped in the effort.

Hayes said progress had been made and compared the situation the county faces to having to chip through a boulder on the road, much like the one that had blocked U.S. 52 near Burlington this month.

“We’ve been chipping and we’re about to go clear through,” he said.

Challenging Hayes in his party’s primary is Colton Copley, who currently serves on the South Point School Board.

Copley said he is running because he wants “to give back” to the community, who reached out to him when his parents were killed in an auto accident in 2002.

“I learned what our county and community is about,” he said. “So many people reached out to me and my brother.”

Copley said he has been active in the area, serving as a coach. After going to medical school, he now works as an emergency room physician at Cabell Huntington Hospital.

He said his work there has allowed him to see the effects of the opioid epidemic firsthand.

“I see it on a daily basis,” he said. “There’s not a person here who hasn’t been touched by it.”

He said his biggest goal is to grow the county for business and to increase revenue.

“If we can recruit more shopping centers and businesses, then we’ll have more money to spend,” he said.

Hayes and Copley will face Democratic challenger Robert McCollister in the fall.

McCollister, who has worked as a teacher and coached football at Rock Hill High School from 1988 to 2017, cited his background in education.

“I think of myself as a public servant,” he said. “I always have. My wealth is measured in the lives of my students and helping them reach their dreams. In a lot of ways, I’m the wealthiest person up here.”

He said he is running for the office because he wants to re-envision the role of the commissioner.

“I don’t want to just manage the decline of the county,” he said, pointing to the large amount of people who have moved away for economic opportunity.

He said the role “requires a vision that is practical, achievable and durable.”

One area he said he would like to focus on is renewable energy, which he said is an economic opportunity nations such as China and India are already taking advantage of.

“For once, I would like Lawrence County to be a leader,” he said, adding that he has spoken with leaders in the industry about bringing jobs to the county.

He also said he wants to focus on infrastructure and make it a priority to have high speed Internet access for all of the county.

And he said he wants to work with local superintendents to “see that kids are getting the skills they need.”

“There’s been an inferiority complex with kids in Lawrence County,” he said. “Kids here are just as smart as anywhere else and we need to give them the opportunity.”

Incumbent Republican Jason Stephens said his family has instilled in him the value of public service.

“It’s very important to serve others,” he said. “And I’ve made it a priority to give time to help others.”

He said he takes his office seriously and is proud of his record at improving transparency and efficiency.

He cited the upgrade to the office’s webpage, which allows for searchable information, the sale of dog tags online and downloadable forms.

“There’s also a special section on county budgets and financial reports,” he said. “We update those monthly and keep a history on site.”

He said the main purpose of the office is to provide accurate information to other decisonmakers and the public.

“I hope I have earned your trust,” he said.

Challenging Stephens is Democrat Jason Tolliver, a local businessman, who said to go over his background would “just be telling you” details of his life.

He said what sets him apart is record on the job, having worked for decades in industrial environments and instilled with a strong work ethic.

“I’ve set the bar high for myself to exceed your expectations,” he said.

A lifelong resident of the county, he said he would set realistic goals and achieve them, hoping to focus on property taxes and the jail issue.

Democratic incumbent Marie Hoover  cited her background as a magistrate for the Portsmouth Municipal Court, the law director for Waverly, and solicitor for Piketon.

She said she has practiced also worked in private practice and is steeped in both civil and criminal law.

She said her court hears cases from all areas, unlike the Supreme Court, which gets to select what comes before it.

“I think I have experience in every area of courtroom and know how it works,” she said.

Also running for the court is Republican Jason Smith, a graduate of Ironton High School, Ohio University and the law program of The Ohio State University, who now works as an assistant prosecutor.

He was unable to attend the forum due to a prior commitment, but his aunt, Lori Wells, spoke in his place.

“He comes from a long line of attorneys,” she said. “Jason is a strong conservative Republican who believes deeply in the idea that government is run by and belongs to its citizens.”

She said he believes the rights in the Constitution and the Bill of Rights are not to be infringed.

“He would be an excellent choice,” she said.

Candidates for the State Rep. 93rd District were invited, but did not attend. Incumbent Rep. Ryan Smith said he had a prior commitment, while the Concerned Citizens said they had received no response from challenger Jim Rumley.

St. Joseph to be in conference beginning in 2019-2020 Construction on the new Ironton Catholic Community Parish Life Center has... read more