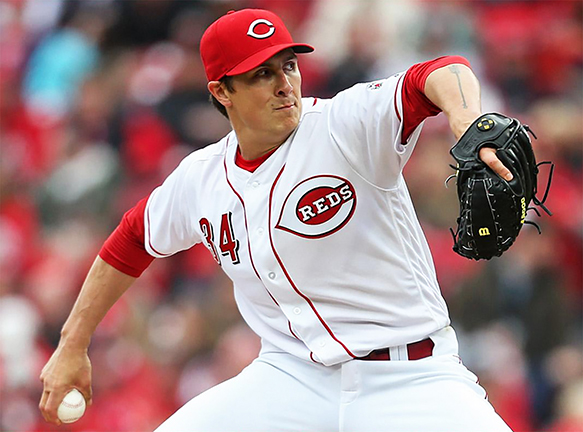 Cincinnati pitcher Homer Bailey turned in an outstanding performance in the season opener on Friday, but the Reds still lost 2-0 to the Washington Nationals. (Photo Courtesy of The Cincinnati Reds.com)

CINCINNATI (AP) — Max Scherzer put on quite a performance for his new manager.
Scherzer struck out 10 in six innings and the Washington Nationals made Dave Martinez’s dugout debut a success, opening with a 2-0 win over the Cincinnati Reds on Friday.
“The biggest thing for me is not becoming a fan,” Martinez said after cleaning up following a surprise clubhouse celebration. “I have to manage the game. It was hard not to be a fan of Scherzer.”
Martinez had never managed in the majors. He was the Cubs’ bench coach before he was hired in the offseason to replace Dusty Baker.
Bryce Harper got two hits for the NL East champions, but his string of five straight opening days with a home run came to an end.
A day after this opener at Great American Ball Park was postponed because of rain, Scherzer (1-0) picked up where he left off. The winner of the last two NL Cy Young Awards gave up five hits, walked one and permitted just one runner past first base.
The Reds put runners on second and third in the fourth, but Scherzer fanned Tucker Barnhart to escape. At one point, Scherzer struck out seven in a row.
“In spring training, you’re pretty much just throwing pitches,” Scherzer said. “Now, you’ve got scouting reports. We had a good game plan. (Catcher Matt) Wieters did a good job. In this ballpark you can’t make mistakes. We were able to avoid the big inning. It came down to executing and using all my pitches.”
Scherzer pitched without long sleeves in a game where the first-pitch temperature was 47 degrees. He felt the chill was beneficial.
“It made the ball a little slick, and I think that helped my changeup,” Scherzer said.
Scherzer posted his 65th career game with double-digit strikeouts. The only hitter who did real damage against him was Scooter Gennett, who finished 4 for 4 with a double.
After Gennett led off the second with a double, Scherzer struck out the next seven Cincinnati batters before Joey Votto flied out.
Brandon Kintzler and Ryan Madson each turned in a scoreless inning before Sean Doolittle pitched the ninth for the save.
Adam Eaton, who missed most of his first season with Washington last year with a knee injury, led off the game with a bloop single. He went to third on Harper’s single and scored on Ryan Zimmerman’s forceout. Harper’s hard slide into second base helped force an errant throw, avoiding an inning-ending double play.
“I’m proud of Harper for getting down to second,” Martinez said.
Trea Turner scored on Brian Goodwin’s sacrifice fly in the ninth.
Homer Bailey, making his first opening day start in his 10th season with the Reds, allowed four hits and one run with three walks and three strikeouts in six innings.
Bailey (0-1), on Cincinnati’s opening day roster for the first time in four seasons due to injuries, also singled.
“I’m not happy with the results because it came in a loss,” Bailey said. “We were able to battle a really good lineup. A couple of little things here and there and we’re still playing.”
Said manager Bryan Price: “I’m not going to ask for anything more than what Homer did.”
“He got soft contact with Eaton and Harper. We couldn’t turn the double play. It is the little things that can cost you a game,” he said.
The Nationals loaded the bases with two outs in the sixth, but Jesse Winker tracked down Michael A. Taylor’s drive to the left-center field warning track and held on despite colliding with center fielder Billy Hamilton. Winker lifted his glove to prove his catch while both players were down on the track. They each stayed in the game.
TRAINER’S ROOM
Reds: Bailey was hit in the back of his batting helmet by first baseman Zimmerman’s throw while running to second on Hamilton’s groundball in the fifth. The ball caromed into short left field. Bailey stayed in the game.
UP NEXT
Nationals: RHP Stephen Strasburg is a combined 3-1 with a 2.58 ERA in the first starts of his last six seasons.
Reds: RHP Luis Castillo allowed three hits and three runs in six innings of his major league debut against Washington last June.
LITTLE HELP
Reds Hall of Fame outfielder Eric Davis went into the stands and picked a young fan to help him deliver the game ball and resin bag to the mound.
RECORD CROWD
Despite opening a day later than scheduled due to rain, the crowd of 43,878 was a Great American Ball Park regular-season single-game attendance record, beating by 74 the previous record, set last season.
BULLPEN CHANGEUP
The Reds changed the ballpark’s bullpen configuration, moving the visitors’ side from right field to left-center and the Reds’ from left-center to right. Price accidentally pointed to the wrong bullpen while making an eighth-inning pitching change.

Final Four turns to 3s for shot at national title

SAN ANTONIO (AP) — These days, the Final Four is all about the 3. Gone are the days when the... read more