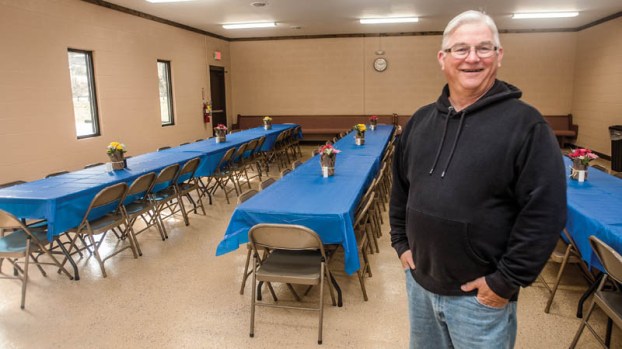 The Hanging Rock Apostolic Church of God will celebrate its 55 anniversary this Saturday will a special service and the opening of its new fellowship hall.

Chris Sturgill, a deacon in the church, said they will have a special service at 6 p.m.

The church has its roots in 1950s when members had house meetings. As the church grew in number, the started having meetings in a garage and in 1962, the congregation bought the old Christian Baptist Church in Pigeon Hollow and a year later, it was renamed the Pigeon Hollow Apostolic Church of God.

In 1989, land in Hanging Rock was purchased and the church, now called Hanging Rock Apostolic Church of God, was completed in January of 1993.

As for how the church has thrived and survived for more than five decades, Sturgill had a simple answer.

He said there have been times the congregation dwindled down to 30 or so people, but “We have always had enough people that were faithful and kept the church going.”

And a prime example of keeping going is the new fellowship hall.
The church broke ground for the hall in August 2010. Pastor Glenn Jenkins told The Tribune then that he didn’t have a guess on how long it will take to build the fellowship hall.

“We’re going to build as we go,” he said. “We’re not going to go into debt. It’s been a thing of faith since we started. The Lord’s worked it out for us.”

Sturgill said the church was built as they had funds, so they had a lot of spaghetti dinners and different things to pay for the hall. He said they hit some snags over the past eight years including that two deacons that were overseeing the project died.

“So, we had to stop about halfway through,” he said.

Sturgill works for Clark’s Pump and Shop in Ashland, Ky. and the owner, John Clark, had visited the Hanging Rock Apostolic Church of God last year.

Afterwards, he asked Sturgill how the hall was coming along. When he found out that it was at a standstill, he offered to help finish it.

“He told me, ‘I would like to help get it done. He had one of his crews come in and finish the plumbing, the electrical work,” Sturgill said. “If it wasn’t for him, contributing his resources, we probably wouldn’t have it done yet.”

Hanging Rock Apostolic Church of God is located 1/8 of a mile north of Hanging Rock on State Route 650.

As it has for nearly three decades, Sharon Baptist Church in Ironton had its Good Friday Cross Walk on Friday,... read more