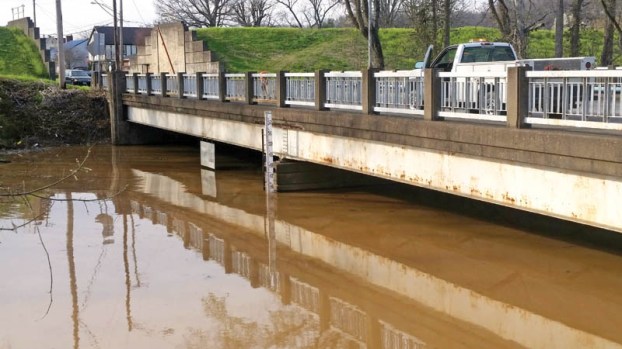 On Thursday evening, a marker on Stormes Creek shows a level of 45.5 feet. By Friday morning, the water had covered the roadway.

The spring rains continue to flood parts of Ironton as the rainy season drags on.

On Friday, the Ohio Department of Transportation announced that State Route 650 had been closed at U.S. 52 and Hanging Rock, due to high water.

“It starts to come across the pavement, probably around 46 and half feet,” he said, adding that Lawrence Street was closed at Moulten’s Field.

He said six of the pump stations along the floodwall were operating to control the flooding. There are 10 stations throughout the Ironton.

Two of the flood control workers, Rick Jenkins and Allen Russel, have been working 12-hour shifts this week to make sure the pump stations were operating correctly 24 hours a day. They started the long shifts and the pumping stations last weekend.

“On Tuesday, we went out of operation but then within six hours, the water started back up again and we had to put the pumps back into operation,” Pemberton said. “So, we have been doing 12-hour shifts since Tuesday.”

Pemberton said the flooding shouldn’t be as bad as it was in February, when the Ohio River flooded and they had to put up floodwall #10, which measures 48 feet, at N. Second Street and Hicks Alley and floodwall #17, at N. Second and Orchard streets.

“I think it is getting ready to crest right now at about 47.5 feet,” Pemberton said on Friday morning. “It is supposed to fall pretty quick. We’re hoping that it will crest before midnight.”

February’s flooding cost the city around $31,000 and Mayor Katrina Keith has put in a reimbursement request to the Federal Emergency Management Agency after the flooding in Lawrence County and several other southern counties were declared an emergency by Gov. John Kasich.

Tax deadline is April 17 As this year’s tax season is winding down, free tax preparation through AARP is still... read more