Crews from AEP work to disconnect the electric service to a home located at 314 S. Fifth St. in Ironton during a fully-engulfed structure fire Tuesday. 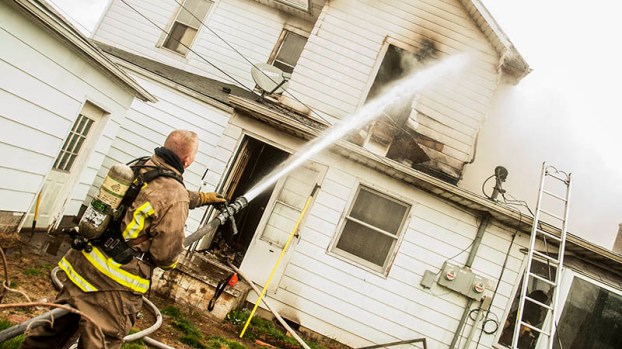 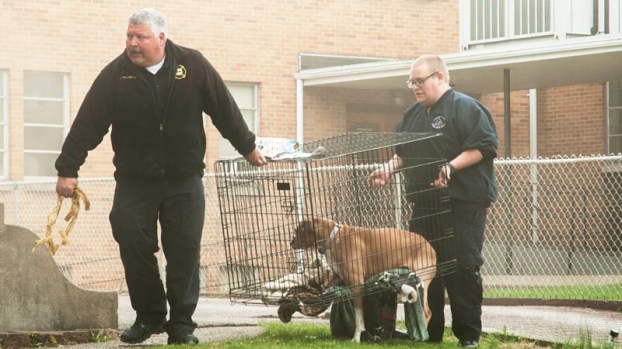 No one home at time of blaze

All three Ironton Fire Department crews were called to battle the blaze of a structure fire at 314 S. Fifth St. behind the Ironton Briggs Library.

“The fire started around 20 minutes to 2 p.m.,” Ironton Fire Chief Mike Mahlmeister, who was first to the scene, said. “We did an ‘all call,’ where all three of our crews are called in. Not everyone was able to make it, but we have most of our guys here.”

He said that the cause of the fire has yet to be determined, and that when the crews arrived, heavy smoke was coming out of the back of the house.

“We entered through the back door and encountered fire on the first floor in the back of the house,” he said. “There was fire burning on all four floors; from the basement all the way up to the attic. There were also some extensive holes through the floors, showing that fire was underneath us. Once we got in and assessed everything, we realized that there was fire on multiple levels.”

He added that no one was at home at the time of the fire, but three dogs and one cat made it out OK.

“We were a little concerned that someone was in the house because there was a car that belonged to the family in the driveway, but she was out with a friend at the time,” Mahlmeister said. “We got two dogs out from the side of the house, and one that was in the garage, safe. There was also a cat that ran out on its own.”

He said that because the owner of the house, Kent Jordan, works for the city of Ironton, he was in contact with the Ohio State Fire Marshal’s Office to assist in investigating to determine a cause.

“I want to make sure there’s no conflict of interest in determining the cause of the fire,” he said. “It’s just to have all bases covered.”