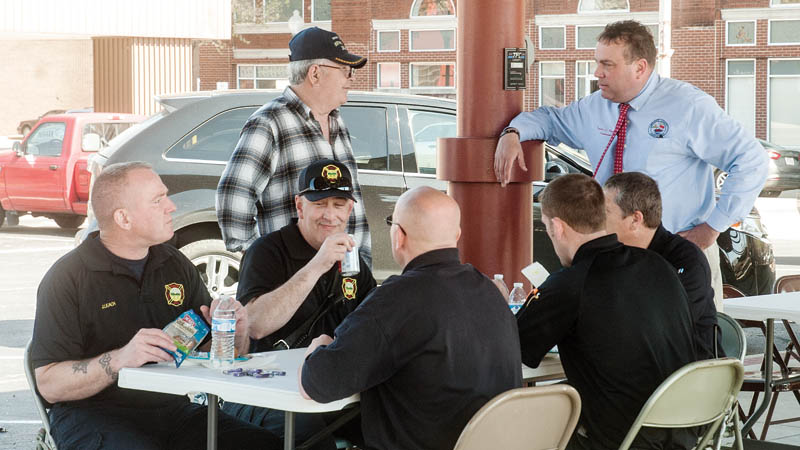 Most of the time when first responders go some place, it isn’t for a fun time.

It was a little different on Thursday. The Alcohol, Drug Addiction and Mental Health Services Board of Adams, Lawrence and Scioto counties invited all area first responders to come to the Ironton Farmers Market to eat and hear some proclamations in their honor.

Susan Shultz, the executive director of the Adams, Lawrence and Scioto ADAMHS board, said it was part of statewide events held by the 51 ADAMHS boards across Ohio to thank the first responders for doing their part in the fight across the region to fight against the opioid crisis and the emotional toll it can take on them.

“They do so much to help all the people that have issues in the opioid epidemic. They are front line, they see it every day,” she said. “We just wanted to thank them. And we thought it would be nice to have a picnic-style event, especially since we are finally having perfect weather. It’s just a nod of appreciation. I don’t think they get that enough.”

Wagner said Ironton is dealing with the drug crisis on multiple levels.

“Just in the month of March, we had over 20 drug arrests during traffic stops. That doesn’t include warrant arrests,” she said. “And here we are about halfway through April and it isn’t slowing down.”

She said the police department recently got more narcan, which counteracts the effects of a narcotics overdose, from the Ironton Health Department.

Wagner said she was happy with the recognition.

“We love our community, we love our city,” she said. “I feel confident speaking for other emergency agencies, because if we didn’t love it, we wouldn’t be here. We do appreciate these folks coming out and acknowledging we are here.”