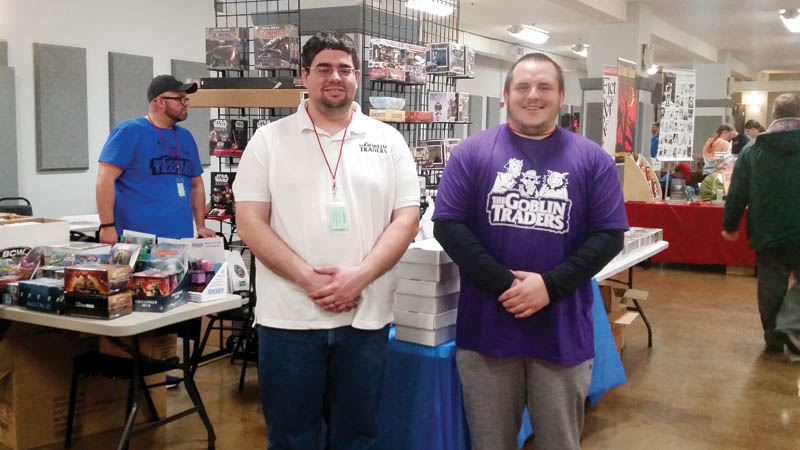 Cody Sloas and Aaron Dillon, owners of The Goblin Traders, set up their wares at the annual Highlanders HeroCon on April 7. Their store is having one-year anniversary events today and Sunday.

Goblin Traders, a gaming store in Ironton, will be having an anniversary celebration this weekend.

Goblin Traders stocks a lot of things; board games, both collectible and game cards, comics, Funko Pops, and miniatures and paints for table top games like Star Wars Legion, Dungeons and Dragons and Warhammer.

Last April, Cody Sloas and Aaron Dillon bought Goblin Traders bought the store from Bryce Martin. The pair are longtime gamers and thought it would be the perfect business for them.

“We’d been playing Magic: The Gathering together for about 10 years,” Sloas said. They were taking classes at Ohio University Southern and got to be good friends as they traveled to the main campus in Athens for a chemistry class. “We always went to conventions together and really enjoyed board games. We always joked about owning a store. So when the opportunity came forward, we decided we better jump while we had the chance.”

Sloas said that while he had never run a business before, he grew up working on a farm and has coached sports teams for a long time.

“Both of those have aspects of being involved in a business,” he said. “They are both time consuming and you have to deal with a budget. I think both of those things prepared me for a leadership role.

He said Dillon works at Marathon.

“So, working in a lab, he is comfortable with deadlines,” Sloas said. “So we have all that going for us.”

Sloas said their customers range in age from 7 to 70, from Pokeman fans to Warhammer fans to people who want to play a board game.

“We are happy to have all ages here,” he said. “We try our best to be kid-friendly and open to the public.”

He said as far as tabletop gaming goes, it is Warhammer that brings in the most customers.

“We have leagues, so that has done really well for us. We have Magic: The Gathering tournaments on Fridays and we get a lot of people showing up for that,” Sloas said. “And we are growing our communities with a new game called Dragonball Super, it’s still growing.”

Sloas said they try not to focus on one specific game; rather they try to include everyone’s interests.

“All games are worthy of the interest they generate,” he said. “We try to know and play the games so we can help our community.”

As for anniversary activities, today they will be having events and demonstrations.

“And we will be giving away door prizes,” Sloas said.