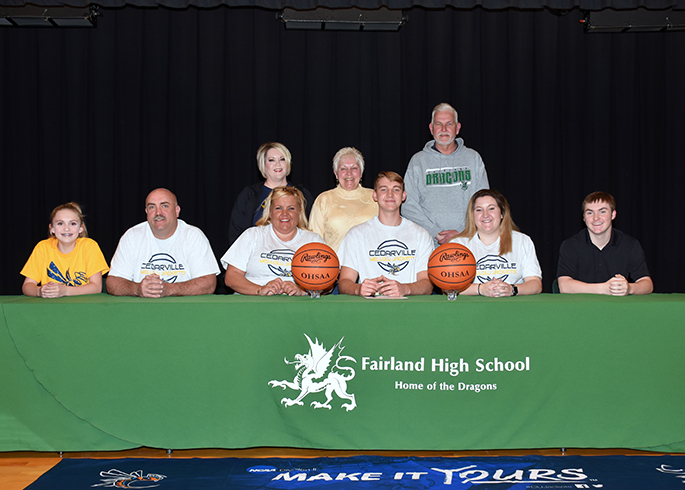 PROCTORVILLE — Cedarville University is known as a basketball crazy town. The arena is generally full for each game.
And although that impressed Fairland Dragons’ 6-foot-8 All-Ohio center Kollin Van Horn, he said there were other factors that drew him to the school for his college career.
Marshall, Marietta and Kentucky Christian were the main schools Van Horn considered, but Cedarville proved to be the right choice.
“I’m really excited about the opportunity. It felt like home and I like that they have a big Christian background. That was one of the main reasons I went there,” said Van Horn.
“It just seems like a better fit right now. I’ve always wanted to play somewhere no matter where it was.”
Playing at Cedarville could come immediately for Van Horn. He said that his playing time is all up to him.
“However hard I work. If I work hard this summer, I’ll have a great opportunity to play,” said Van Horn. “There are no specific positions, but I’ll probably be their big guy. They have a couple more recruits coming in who are about my size.”
Van Horn knows that playing at the next level will be a tougher challenge, but he said he won’t know what it will take to play until he experiences it first-hand.
“It’s hard to say without stepping on the floor. There will be a lot more competition, but I’m ready for it,” said Van Horn.
“Hopefully when we get there we can win some championships.
Van Horn — who was the Southeast District Player of the Year — was named to the All-Ohio first team after he averaged 16.0 points, 9.0 rebounds and 4.0 blocked shots.
He also shot 57 percent from the field and had more than 1,000 career points and surpassed 500 career rebounds.
Despite all his personal accomplishments, he said it was a team event that is his most fond memory. Van Horn pointed toward reaching the Division III state tournament his junior season.
“It was the state tournament and stepping on the Schottenstein floor. And that’s my favorite team – Ohio State. And my team made it and that made it special,” said Van Horn.
“It was great starting as freshmen for all of us. It builds a lot of character and team chemistry. I can’t say enough how (his teammates) helped push me. And we didn’t care who scored the points. Whomever was hitting that night, we fed him the ball,” said Van Horn.
Van Horn admitted that 1,000 career points and 500 career rebounds was big, but he pointed to teammates Luke Thomas and Isaiah Howell who scored more than 1,000 points and Howell also had more than 500 rebounds.
“It’s a big accomplishment, but my teammates accomplished a lot. It was big for me but it’s not like I was the only one,” he said.
One thing that changed for Van Horn this past season was shooting more 3-pointers. And not only did he shoot them, he made them.
“I expanded my game. I just felt like I needed to expand my game the way basketball is going now. You’re not a set player,” said Van Horn.
Van Horn plans to major in electrical engineering.