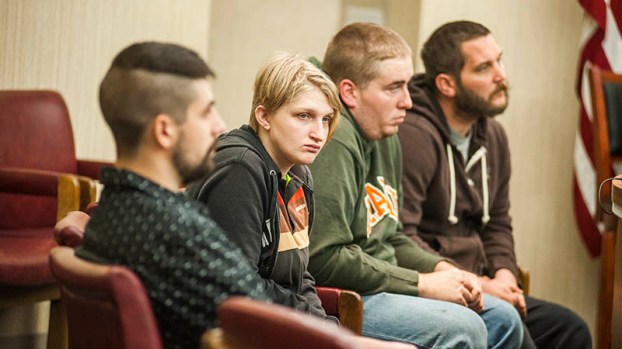 The drug court, which Lawrence County Common Pleas Judge Andy Ballard had been working on getting certified for more than a year, is called the “Nexus Recovery Docket,” a name Ballard said embodied the purpose and mission of the court.

“After looking at several different names for the court, I decided Nexus was the best option for what it stands for,” Ballard said. “It means a connection or series of connections linking two or more things, a connected group or series, or the central and most important point or place, which is what this program is all about.”

Richard (Adam) Ferguson, Jonathan Dunn, Briana Kinstler, Christopher Goodwin and Zachary Farrow were all in attendance, and shared their backgrounds, how they got where they are, and what they are doing in the recovery process.

Dunn, of Portsmouth, said that he was arrested for possession of cocaine and marijuana, and that he is trying to now turn his life around for his children.

“I have three kids,” he said. “One is 5, one is 3 and the other just turned 1. They’re staying with my mother now, but I want to get clean and be able to be there for them.”

He added that he is currently in treatment at Mended Reeds, and just moved up to a less-restricted house, allowing him some more freedom and time to spend with his kids.

“I’ve been clean of drugs since Nov. 15. I had one slip up with alcohol in January, but I’m continuing to get treatment,” he said. “My overall goal is to better myself for myself and for my kids. My kids are number one, and I’m slowly trying to get my life back and get back into their life.”

Kinstler, of Ironton, said she had been in and out of jail since she was 18, when she first started using drugs such as marijuana and cocaine before eventually turning to heroin.
She said she has lost several family members, including her sister, to heroin overdoses, and that she was trying to get clean.

“I have a son who’s 3,” she said. “I hope to get on the right path for my kid and stop hanging out with the people who are still using.”

She added that although she is not currently in treatment, she has been sober for a week and works full-time at Burger King.

Originally from Greenup, Kentucky, Farrow said he started smoking marijuana at 13, drinking alcohol at around 17, but didn’t start using harder drugs until he was laid off at AK Steel a few years ago at age 35.

“I got arrested for possession of methamphetamine, but I was using heroin also for about a year, and I OD’d on heroin last fall,” he said.

He said that while he was taking his son some kneepads for football, he stopped to use, and the next thing he knew he woke up in an ambulance.

“My family was all around me, and they didn’t know I was using any of that stuff,” he said. “I’m just trying to get clean and be able to get my family’s trust back.”

Goodwin, who has also overdosed on heroin on more than one occasion, said that he began drinking alcohol regularly in high school, followed shortly by marijuana and eventually pills at 19 or 20 and then finally leading to a heroin addiction.

“I’ve been clean for 114 days right now. I’ve tried to get clean before, but I feel like I’ve made the most progress this time than ever before,” he said. “I’m excited about this opportunity to have accountability and support.”

Ferguson, who has been clean for about nine months, said he was arrested for possession of marijuana, and is thankful to be able to have the opportunity to participate in the drug court.

Lawrence County Commissioner DeAnna Holliday said she was very proud of Ballard for finally getting a certified drug court for the county.

“Judge Ballard and I campaigned together at the same time for our seats, so I witnessed first-hand the passion that he has for that,” she said. “It’s a great day in Lawrence County to have another tool on our belt to fight this epidemic. I can’t say enough about Judge Ballard and what he’s done.”

The Nexus Recovery Docket is only for people with low-level, non-violent crimes, either directly involving drugs or something they have done because of their addiction. The drug court will meet at 1:30 p.m. on the first and third Thursdays of each month.

Several more potential Nexus Recovery Docket participants are currently in the process of being interviewed.

The investigation into the death of an infant in Ironton continues. “As of right now, it is still an open... read more