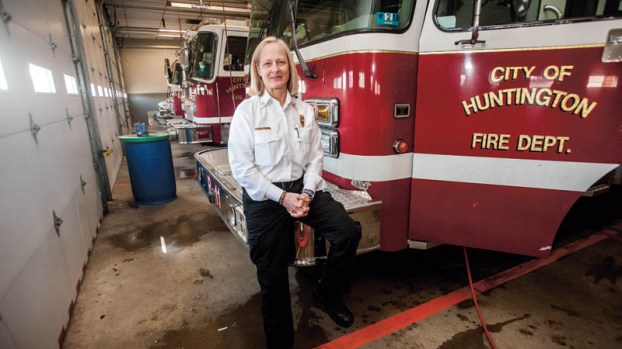 The honors for Jan Rader and her efforts against the opioid crisis continue.

“I’m shocked, to be honest with you,” Huntington Fire Department Chief Rader said. “Never would I have ever imagined being chosen for such an achievement. It’s not something you ever think about. Heck, I didn’t even think I would be a fire chief. It has been very humbling.”

The honor puts the Ironton native amongst the people who personify 2018, like President Donald Trump, Kim Jung Un, the Parkland High School students, astronaut Peggy Whitson and a host of celebrities and global leaders.

Rader made the list for becoming the face of those who are fighting back against the flood of drugs in America after appearing in the Netflix documentary, “Heroin(e),” which follows Rader, Brown Bag Ministries founder Necia Freeman, and Cabell Huntington drug court Judge Patricia Keller as they deal with being on the front lines of fighting drug abuse in Huntington, West Virginia.

Rader found out about the honor about three weeks ago after she got an email from a Time magazine editor. She then Facetimed with West Virginia’s U.S. senator, Joe Manchin so he could write the article for the magazine.

“I was very excited to find out he was writing the article, because he is a good guy,” she said.

Manchin wrote that Rader, as the first woman to lead a professional fire department, broke down barriers in West Virginia and that she remains on the front lines combating the drug epidemic every day and has helped save countless lives.

“Everyone at the Southern Campus is thrilled at news of the latest accomplishment of Jan Rader,” said OUS Dean, Nicole Pennington, adding Rader’s frontline efforts as a nurse and fire fighter in the region’s opioid fight are exemplary and she truly is changing lives. “It is an honor of a lifetime for Jan. Our faculty and staff are elated to have our alumna recognized by Time Magazine in the list of the 100 Most Influential People in the World,” Pennington said.

It has been an adventure for Rader for the past couple of months. After the documentary came out, Rader appeared on national TV shows and radio shows, including NBC’s  “Meet the Press” and on public radio’s “Studio 1-A.”

In January, “Heroin(e)” was among five films nominated for an Oscar in the Best Documentary Short category. Although the film didn’t win, Rader got to the Oscars ceremony and was probably the only person in the red carpet history to wear their uniform jacket over a dress.

Rader was Manchin’s guest at the State of the Union Address, when Trump addressed the U.S. House of Representatives in January.

And in a couple of weeks, she will attend the Time’s 100 Gala in New York.
When asked which was her favorite event, Rader said they were all unique in their own way.

“They are all very exciting for very different reasons,” Rader said, adding that all of these things have opened up doors to make a difference in our community. “The documentary shows that it is important what is happening on the front lines of this epidemic and that we have to show compassion for all people on the front lines, that is needed more than ever.”

Rader graduated from Ironton High School in 1983 and then went to Marshall University for about a year and half before going into the jewelry business for 13 years.

After a woman had a heart attack in front of the jewelry store, Rader realized she didn’t know CPR and had to call 911 for help. She took a CPR class and an EMT basic class and then started to apply to be a firefighter in Washington, D.C. but her brother, a pastor in Huntington at the time, told her about a job opening in the city.

She passed the test and was hired in 1994. She went on to take a paramedic class and worked as a paramedic with the Ceredo Volunteer Fire Department. Then she went to Ohio University Southern and became a nurse. On her days off from the fire department, she would work as a nurse in the ER at Cabell Huntington Hospital

Huntington Mayor Steve Williams set up the Office of Drug Control Policy in 2014 and Rader was appointed to it because of her background in nursing. She was also promoted to shift commander at the fire department. She was appointed as the fire chief in March 2016.