Lewis gets his chance at college baseball 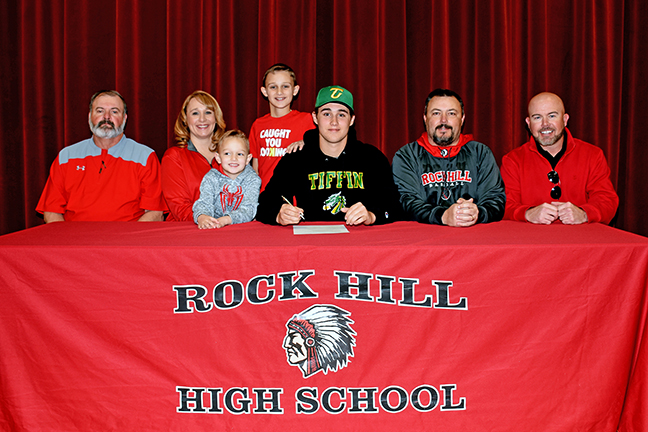 PEDRO — A lot of high school boys have a girlfriend. Cody Lewis may have one or two he likes, but right now the love of his life just made a four-year commitment to him.
The Rock Hill Redmen senior pitcher got a commitment from the Tiffin Dragons as he signed a letter-of-intent on Friday.
“I started playing baseball when I was 4-years old. It’s always been the love of my life. And I always knew from a young age I wanted to play college baseball,” said Lewis.
“Growing up, I played all sports: baseball, football, basketball. In high school, I didn’t play football but I ran cross country to keep my legs in shape and condition myself to be a good starting pitcher.
“After my sophomore year, I started specializing. I dropped basketball and started focusing on cross county and baseball to make a college career.”
Lewis selected Tiffin over Muskingum, Capital and cross-town rival Heidelberg.
“Capital is my mom’s alma mater, so it was one of my top choices,” said Lewis.
“Tiffin has had a lot of success lately and they’ve got a new coach (Joe Wilkins) who I really like. Their coaching staff is fantastic.
“They have very good competition. They play very good baseball, old-school baseball and I feel I’ll really fit in there.”
Lewis has been a starting pitcher during his four years with the Redmen, but he will change the way he is used initially for Tiffin.
“It looks like I’m going to go in and be a reliever my first year or two and fill a starter role my upperclassmen years. Hopefully, that’s the plan,” said Lewis.
But starter or reliever, Lewis is just thankful to have achieved his goal.
“Everybody’s goal is to make it. My goal is to compete at the collegiate level and play good quality baseball while I’m doing it,” said Lewis.
Realizing his dream of playing college baseball made Lewis reflect on those people in his life who had a hand in his success.
“I have to credit my high school coaches (Barry Litteral, Jerry Kidd), my pitching coach Tim Nelson who really helped me out a lot. He’s been a very big difference in my life. He’s taught me the ropes and showed me everything,” said Lewis.
“And my father and mother have been huge. They’ve really given me the opportunities and I’m very blessed to have them and allow me to pursue what I love,” said Lewis.
The right-handed pitcher plans to major in education and become a teacher.
“I want to coach baseball as I grow older,” he said with a grin.