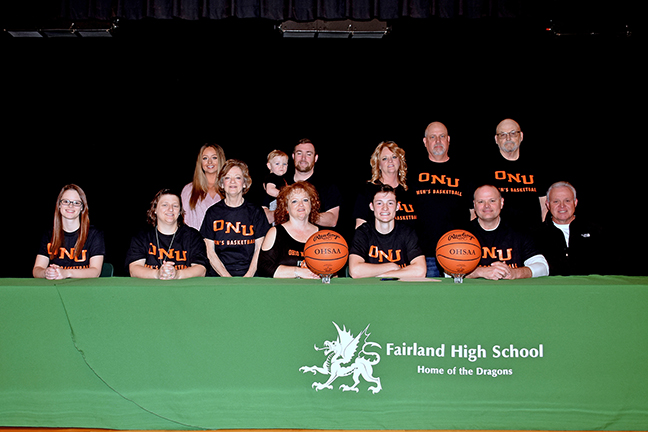 PROCTORVILLE — Ty Staten knows how to put things aside to find the best results.
The Fairland Dragons 6-foot-2 senior point guard put scoring aside to help make the team better. He then put basketball aside to help him decide to sign with the Ohio Northern Polar Bears instead of West Virginia Tech.
Staten plans to major in pharmacy at Ohio Northern. He said he would have majored in chemical engineering if he had gone to West Virginia Tech.
“I just looked at education because at the end of the day, that’s what I’m going there for,” said Staten. “I took basketball completely out of it and decided it was going to be for majors.”
As for basketball, Staten put scoring aside to do the other things because he believed that would be the best thing for the team.
“That’s what was needed – a facilitator who could get everybody involved in the game which in turn gets everybody involved defensively. We wanted to have an all-around performance, not just one-sided,” said Staten.
Fairland coach Nathan Speed said Staten had qualities that made him valuable but didn’t show up in the scorebook.
“He was very unselfish. He had a lot of scorers around him. He could score himself, but he sacrificed a lot just to get everyone involved. He saw the bigger picture. He saw that his freshman and sophomore years,” said Speed.
“He’s one of the best I’ve seen at controlling the tempo at the point guard position. He took care of the ball and was a great defender. It’s going to be hard to replace him.”
The Dragons won three straight Ohio Valley Conference titles and reached the state semifinals his junior season.
The four-year starter averaged 7.3 points on a team that had four players in double figures and three who scored 1,000 career points.
But he also had 4.0 rebounds as a guard to go with 6.0 assists and 2.0 steals.
“A lot of guards leak out. I’m already coming back to the ball anyway, so I might as well go down there. I jump pretty well. I get more under but the long rebounds I run down,” said Staten.
Besides the academics, Staten said there were other aspects of Ohio Northern that made them attractive.
“I loved the campus. I spent the night with some of the players and I fit right in. It was a big family atmosphere,” said Staten.
“I went to a couple of games and it is like a community there and it felt a lot like here. It really impressed me and the academics are amazing. I like coach (Rich) Bensman a lot. It was just a culmination of those things.”
As for playing time his freshman season, Staten said nothing has been promised.
“I don’t know for sure, but as long as I work hard I can get some time. I’ll fill in the role I need to,” he said.