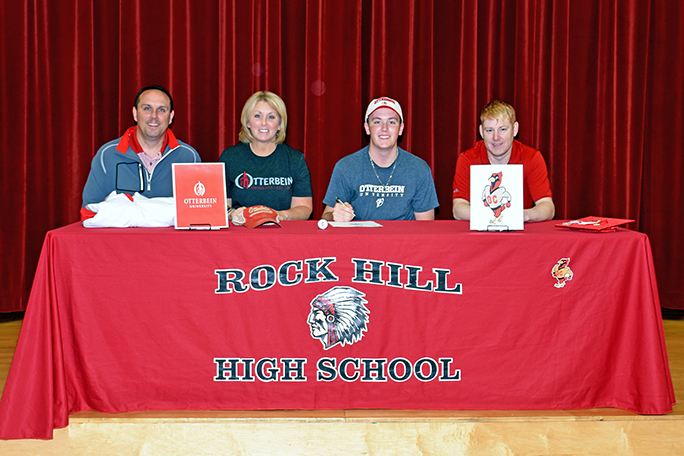 PEDRO — Logan Reed likes shiny things, and the trophy case of the Otterbein Cardinals is pretty bright.
The Rock Hill Redmen senior golfer picked Otterbein over St. Bonaventure, Tennessee Tech, Shawnee State, Marshall and NAIA St. Andrews in North Carolina on Wednesday as his college career choice.
Otterbein has won 19 conference titles in 24 years including their eighth-straight Ohio Athletic Conference regular season title this season.
“I think Otterbein was the best fit for me with all they had to offer plush I love the area,” said Reed. “They compete for NCAA titles. That was a big deciding factor.
“They’re always competing at the national level. It’s not just going to play for a team. We’re going to play for something, too. Going to the nationals and competing for a national title was the biggest deciding factor.”
Reed was a four-time All-Ohio Valley Conference honoree and a two-time all-district selection. He was the OVC, sectional and district medalist his senior season.
His career culminated with a berth in the Division II state tournament where he shot a 153 and finished 12th overall.
Last summer, Reed was a top five finisher in the Knoxville Junior Open and was in the top 20 at the AJGA Tournament at Bellefonte, Ky.
“I truly believe in my heart, realistically, I can be a two or three man there. The coach thinks if I play to my potential, there’s no reason I can’t be in the starting five there. I didn’t want to go somewhere and not play,” said Reed.
Rock Hill coach Brent McCoy had nothing but praise for his senior golfer.
“He’s an exceptional talent. He works extremely hard. To be successful at any sport you have to work hard, especially golf,” said Rock Hill coach Brent McCoy.
“I’m very proud of him. He’s a great kid, a great athlete and an exceptional student, too.”
Otterbein is a strong academic school and Reed is leaning sports medicine as a major.
“The academics there are top-notch along with the golf team. Being so good (at golf) was just a plus,” said Reed.
McCoy is confident Reed will be able to step in and contribute for the Cardinals.
“As hard as he works, his gifts and talents, I think he’ll be an exceptional addition to their team,” said McCoy.
Reed began playing golf when he was three, but he said he started getting serious about the game when he was in the seventh grade.
He said there have been a lot of people who have helped him achieve his goal of playing at the college level. He said him parents — Larry and Tamie — and family along with McCoy, Brent Morgan and Nathan Kerns.
“I have my mom and dad to thank. They pushed me a lot. Mom took me to golf courses at times that were hard for her. Dad always took me to lessons and tournaments,”
“My grandparents, family, friends and, of course, the Man upstairs.”
Reed then added, “I consider Brent and Nathan to be my best friends. They’ve helped me so much with the physical and mental aspects of the game.
“I can’t thank them enough. Nathan is known for being a great golfer in this area. He has helped prepare me for college golf. Coach McCoy has helped me for four years. He motivates me and always helped to keep me calm.”