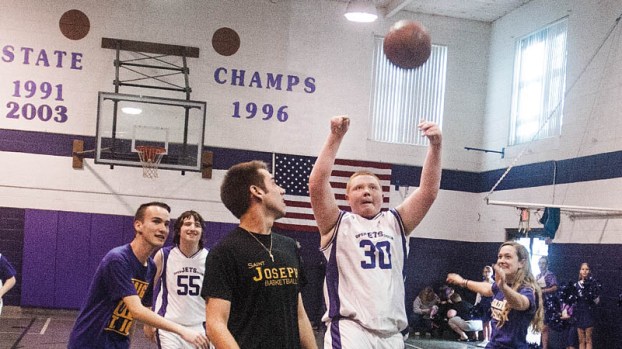 JT Jones attempts to score during a basketball game against St. Joseph High School students on Thursday. During half time, Open Door School soon-to-be graduates were recognized in a special senior day event with their families.

Jets take on Flyers as part of Senior Day

Every year, the Open Door School honors its graduating seniors during the alumni basketball game in March. Due to the wild, late spring weather, that game got cancelled. So, Open Door Principal Kendra Heim decided to make a day of it.

“We decided to have a senior day and we invited St. Joseph High School to come down and play against our team,” she said. “And we are also providing a luncheon for the parents and staff. We decided to make it a special day for the kids.”

She said the kids seemed to be enjoying the ball game, which was held in the Open Door gym. Students got to sit on the stage and parents watched from the sidelines as the Jets took on the theology class from St. Joseph. Everyone cheered and clapped, no matter which team made a basket.

“It seems to be going really well,” Heim said. “Everyone is enjoying the ball game. And I’m excited about the luncheon, it’s the first time we’ve had a sit down lunch like this.”

Parent Kimberly Corn was there to see her son, Jacob Thompson, being honored for being a graduating senior.

“It’s kind of sad, he’s been here since he was five years old,” she said. “So, we will be starting something new.”

She said she and the other parents were enjoying the game.

“All the kids have been really well mannered and are doing great,” Corn said.

The Flyers also seemed to be enjoying themselves during the game. It seemed like they were taking it easy on the Jets during the first quarter, but were playing harder as the game progressed and the Jets scored frequent baskets.

“Part of their curriculum requirement, every Wednesday, they go out into the community and do Christian service,” she explained, adding that besides Open Door, they also serve at the City Mission, the Harvest for the Hungry Food pantry, Community Kitchen in Ashland, Kentucky, nursing care facilities, People Centered Services, and help teach kids to read at St. Lawrence grade school. “This is probably one of the more fun things they do. Most of the time, they don’t get to see the fruits of their labor because they are doing behind the scenes activities.”