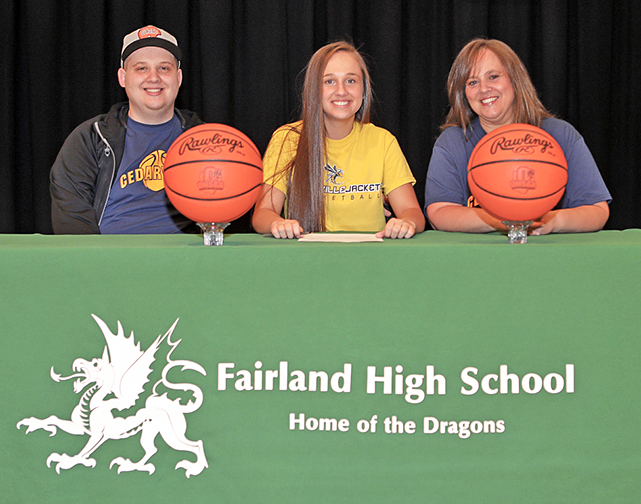 PROCTORVILLE — Jon Buchanan knew from day one that Emily Chapman could play.
Now, the Cedarville Yellow Jackets know all about her, too.
The Fairland Lady Dragons’ 5-foot-5 senior point guard signed a letter-of-intent on Friday to play for the Cedarville Yellow Jackets.
“From the day she came in, we knew we had something special. The year we went to the state tournament she was a huge part of it. Our little guard makes the game-sealing block in the regional finals to send us to the state tournament. IQ-wise and skill-wise, it’s out of this world. She’s like a coach on the floor. She always put us in good situations,” said Buchanan.
And he was right.
The Division III first team All-Ohio selection scored more than 1,000 points in her career and she had 35 points in a game against Chesapeake this past season in which she made 10 3-point goals. She shot 39 percent from 3-point range for her career.
She averaged 19.7 points a game along with 3.8 rebounds, 5.7 assists and 4.1 steals. A four-year starter, Fairland was 84-15 during her career.
Chapman had offers from numerous schools including Glenville State and Rio Grande. She also talked with Marshall.
But the idea of playing college basketball at a Christian school appealed to Chapman.
“I’ve been to Cedarville camp over the summer for five or six years and I just love the campus. I love the people there. When I went on my visit there, that was it. I knew it was the place for me,” said Chapman.
“I think it’ll be awesome getting to play and then using that as a way to worship the Lord,” said Chapman.
There were a lot of schools who turned away when they saw her size. Chapman doesn’t see her height as a determent.
“That was always it (with recruiters). They’d say she’s 5-5. But if you have the talent, what does it matter?” asked Chapman rhetorically.
Although Chapman is a great scorer, her all-around talents as a point guard are what sold Cedarville.
“I’d say I’ll play point guard right now because they have a lot of shooting options. It’s just handle the ball and get it out to the shooters. If they need me to score for them, I’ll do it for them,” said Chapman.
“I know their point guard this year had knee problems, so I don’t know how that’s going to go. Hopefully, I can go up and work hard and maybe get the starting spot at point guard, but I guess we’ll see.”
Buchanan acknowledged Chapman’s other skills, but he said she could have scored even more points.
“If she was playing in another system, she might have scored more points. We try to have five different options. She is a pass-first point guard even though she scored over 1,000 points. The way she played in the district tournament (this season) was phenomenal,”: he said.
Chapman will take a lot of memories with her as she leaves Fairland to play at the next level.
“(Going to) State my freshman year was a lot of fun. The game where I scored 1,000 points. It was just awesome. My team was just the best. My supporters were awesome. It’ll always be like family here,” she said.
Chapman will be a member of the women’s team while classmate Kollin Van Horn will be joining the men’s team.
“Me and Kollin are going to the same place so that’ll be cool,” said Chapman.
Chapman plans to major in business sports management.

South Point Pointers’ Brendon Dillon leaps in the air trying to avoid getting hit by a pitch during Friday’s game.... read more