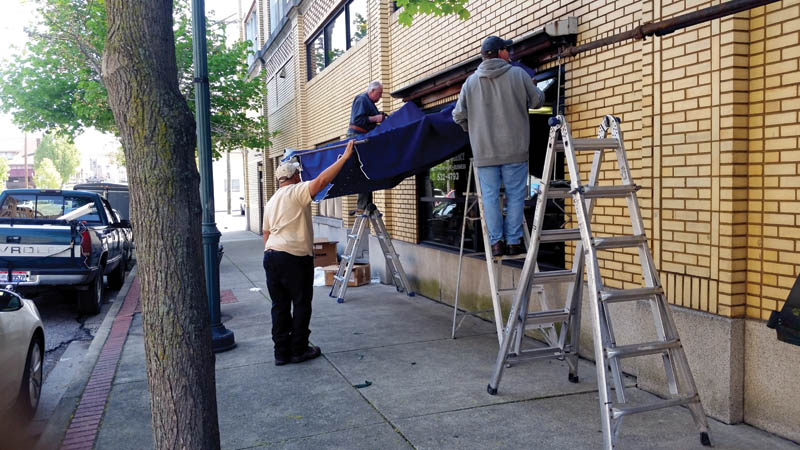 A crew from Eagle Awning, of Portsmouth, puts up a new awning on the Ironton City Center on Friday. The old awnings have been up since 1994.

Part of clean up for Memorial Day parade

The Ironton City Center is looking a little more spruced up.

Mayor Katrina Keith said it was part of the clean up the city is doing for the 2018 Memorial Day Parade, which is marking its 150th year.

The building got new awnings on Thursday and Friday.

“Judge Kevin Waldo allocated those funds and gave us an opportunity to do some long overdue façade improvements,” she said. “With our budget constraints, the city hasn’t been able to do it. We are along the parade route and, with the City Center being one of the iconic buildings in downtown Ironton business district, it only makes sense to have the building look nice and presentable.”

Keith added those awnings were old and had probably been up since the city moved into the building in 1994.

“The awnings were vinyl and had holes in them and they had served their purpose,” she said. “It was just something we couldn’t upkeep, so when these funds became available, we wanted to make sure the building looked good for the 150th Memorial Day parade. Waldo was nice enough to purchase those for us.”

She said the Ironton Municipal Court has had community service crews throughout the city doing other beautification projects.

Funds will also be used to reseal the parking lot behind the Ironton Police Department, since it was in need of it and hasn’t had anything done to it since 1994, either.

“Waldo has contracted with a local contractor to do that,” Keith said. The contract went to Coverall Paving Construction of Ironton, which had a crew working on the lot on Friday morning. They will also be laying down paint to mark parking spots and paving the alley behind the city center.

Ironton Police Chief Pam Wagner said she is happy to see the work being done. The awning over the entrance to the department offices was replaced on Thursday afternoon.

“I love our new awning, there is a hand-stitched badge on it. It’s really sharp,” she said. “We are really encouraged. Our businesses downtown are really stepping up and making the town look really nice for the parade.”

Ironton Municipal Judge Kevin Waldo said the money for the awnings, the repaving of the municipal parking lot and the alley came from the court’s special projects fund, which had been created 26 years ago.

Waldo said there was a surplus in the account and he said he knew from his 12 years on city council that there was a dire need for funding and looked for a way to help the city make some improvements.

“We put $50,000 out of the special projects fund into the city’s general budget for beautification of this building and this area,” Waldo said, adding that he felt the city building needed to be cleaned up.

He added he was happy to have crews from the community service program help out in places where the city doesn’t have enough workers. Twice, crews have helped clean up the river bank after floods.

“You wouldn’t believe the amount of driftwood and trash they picked up,” Waldo said. “They spent three days down there picking stuff up. Then the city used an end loader to move all the stuff and haul it away.”

He said it was looking good and then the Ohio River flooded again and crews spent another two days cleaning the area up again so it would look good for Navy Night.

Crews recently mowed the foot-high grass around Memorial Hall and mowed the Little League ballpark after their lawnmower broke down and the soccer fields on Ninth Street.