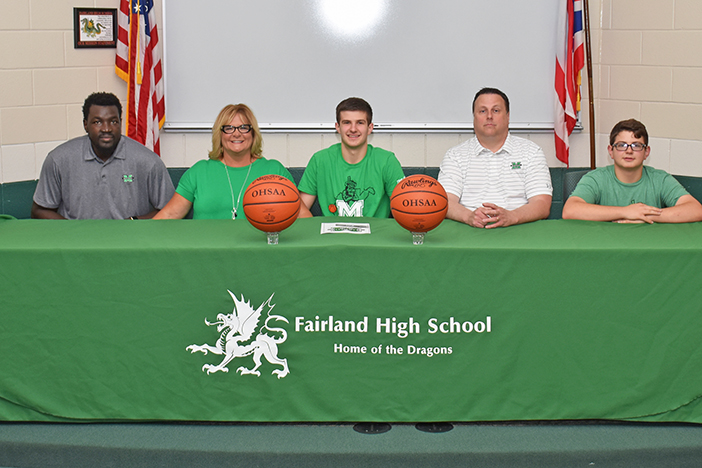 PROCTORVILLE — In “Star Wars,” the key line was, “Luke, I am your father.”
In “Stat Wars,” the key basketball line is, “Luke, you are my shooter.”
Such is the case with Fairland Dragons 6-foot-2 All-Ohio senior guard Luke Thomas who never met a shot he didn’t like.
Thomas shot 42 percent from 3-pointer range and 52 percent from 2-point range. He hit a 3-pointer with 14 seconds to play that beat Gallipolis 60-59.
In a 91-52 win against Ironton, the Dragons made 19 3-pointers and Thomas scored 27 points on 9-of-14 from behind the arc.
That long-range shooting style convinced Marshall head coach Dan D’Antoni to give Thomas a preferred walk-on deal to play for the Thundering Herd next fall.
“Get your running shoes on is what he told me,” said Thomas who signed a letter-of-intent on Thursday. “He said you shoot the ball well, so you’ve just got to work your way up.
“Obviously, I’m a walk-on so I’ll just try to get the best that I can. What I learn from him, maybe I’ll be a coach myself or whatever opportunities present to me.”
Thomas averaged 14 points a gem along with 4.0 rebounds and 2.0 assists as the Dragons won a third straight Ohio Valley Conference title and reached the Division II regional tournament.
Fairland head coach Nathan Speed said Thomas has the tools and attitude to not only make the Marshall team but become a contributor.
“He understands the game so well and his work ethic will be fine. He’s in the gym everyday trying to get better. He’s going do whatever they tell him they need him to do. His basketball IQ is off the charts,” said Speed.
Thomas said he had a few others schools in mind. He talked with Akron, Marietta, Urbana along with a few other Division III schools, but those three plus Marshall were his main focus.
“I just wanted to have the opportunity to play at Marshall. That’s been a dream of mine for a long time. To get the chance to play there — especially the NCAA tournament — I just want to walk-on and be a part of something that’s great,” said Thomas.
The love affair with Marshall began when Thomas was a child and has continue to grow along with him. He also is a fan of Herd coach Mike D’Antoni.
“I love Coach D’Antoni and the way he plays. So, once he got the job I wanted the chance to play here,” said Thomas.
With his decision and signing behind him, Thomas has turned his full attention toward getting ready for his first college season.
“Sometimes I’ll do a workout at 6 a.m. or after school. It just depends on my plans. I’ll shoot every day for sure for at least an hour. I play and lift. I lift every day. I need to get stronger for D-1,” Thomas said of what he needs to do to prepare for the next level.
“A lot of people have told me that, so that’s why I’m getting in (the weight room) early before I get there. Strength and defensive. Obviously, I’ve got to get better defensively. Offensively, I’ve got to get better finishing over 6-9, 6-10 guys.”
Thomas is the fourth senior to signed to play college basketball along with Kollin Van Horn, Isaiah Howell and Ty Staten. A fifth starter — Keedrick Cunningham — has signed to play college football.
Thomas, Van Horn and Isaiah Howell all scored 1,000 career points. Thomas and the 6-8 Van Horn have played together since they were in grade school and considered playing together in college.
“We talked a lot actually. He got a full ride (to Cedarville) and that’s a great deal for him. It was better for him and I felt Marshall was better for me. We’ll still keep in touch. I can take in the post. He doesn’t know it, though,” said Thomas with a laugh.
Big brother actually gave a positive nod to his brother Clayton who is a freshman.
“If he keeps working, he’ll be a better shooter than me. But don’t tell him I said that,” said Thomas as a big grinned stretch across his face.
Thomas plans to major in accounting.