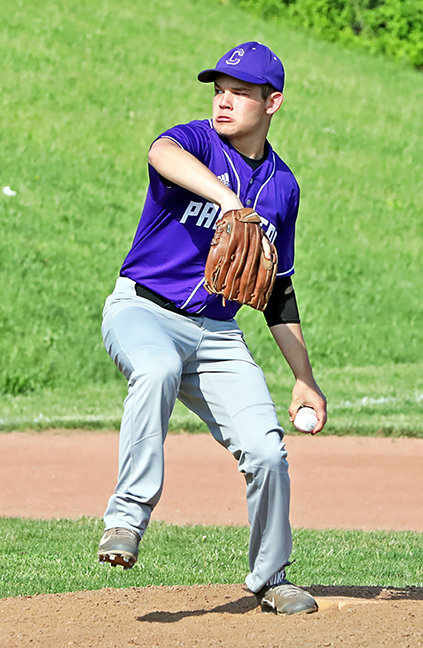 CHESAPEAKE — Bretton Martin had all his pitches working. His favorite pitch was a strike.
Martin threw 91 pitches — 62 for strikes — as he scattered nine hits, struck out six and his only walk was an intentional pass as the Chesapeake Panthers blanked the Nelsonville-York Buckeyes 3-0 in the Division III sectional tournament on Wednesday.
“Bretton Martin pitched a heck of a game. He was working his curveball well. That’s a pretty good way for a senior to end his career on his home field,” said Panthers’ coach Justin Davis.
“It was a good, well-played game. They did have three errors that hurt them, but we played well defensively. We’ll need to hit better on Saturday.”
Chesapeake plays at 11 a.m. on Saturday in the sectional finals at Wheelersburg.
The Panthers took a 1-0 lead in the first inning.
Kelton Jones reached on an error, Evan Burcham was safe on a fielder’s choice and stole second, and Josh Henson was safe on an error as Jones scored.
The Panthers added two more runs in the second.
Zach Wright singled, Eddy walked, Martin put down a sacrifice bunt and Hayden Henson delivered a clutch two-run single.
The Buckeyes had runners at second and third with no outs in the fifth. Martin got the two outs and then issued an intentional walk to Reece Robson to load the bases.
But the next batter flied out to center to end the threat.
The Panthers had seven hits with Jones 2-3 and Henson 2-2.
Nelsonville-York had nine hits with Robson, Bryce Parker-Lent, D.J. Hopkins and Ethan Douglas were all 2-3.
Nelsonville 000 000 0 = 0 9 3
Chesapeake 120 000 x = 3 7 1
Isaiah Kasler, Shakim Williams (4) and Reece Robson. Bretton Martin and Tyler Eddy. W-Martin (K-6, BB-1). L-Kasler (K-4, BB-2). Hitting-NY: Reece Robson 2-3, Bryce Parker-Lent 2-3, D.J. Hopkins 2-3, Levi Wickmann 1-3, Ethan Douglas 2-3; CHS: Kelton Jones 2-3, Josh Hanson 1-2, Bryce Depriest 1-3, Zach Wright 1-3, Hayden Henson 2-2.