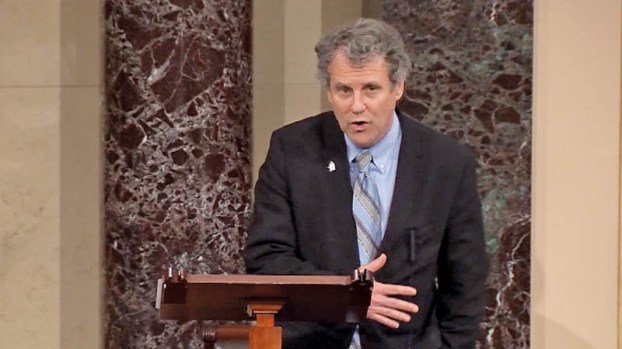 May is National Drug Court Month

Brown said the courts, which are aimed at supporting those struggling with addiction, offer programs that enhance treatment, increase collaboration in the community and save taxpayers money.

“Everyone in this chamber knows how bad the opioid epidemic is,” Brown said. “In Ohio, based on the averages, 11 people will die today of a drug overdose.”
Brown said the country can not “arrest our way out of this crisis.”

“I’ve met with law enforcement officers all across Ohio,” Brown said. “They’re shouldering an incredible burden, and they all say the same thing. They need resources to fight this — that’s why I’ve joined Sen. (Rob) Portman and a bipartisan group of our colleagues on the POWER Act, to get local and state law enforcement the high-tech tools they need to effectively screen for dangerous opioids like Fentanyl.”

Brown said enforcement tools are only one piece of the fight.

“We need a comprehensive approach, and that means recognizing how important treatment and rehabilitation are,” he said. “We can’t write off the thousands of Ohioans struggling with addiction. We can’t write off entire communities. That’s where drug courts come in.”

Brown pointed out that May is National Drug Court Month.

“These courts are partnerships between local law enforcement and treatment providers,” he said. “They’re often spearheaded by judges, who see the same people back in their courtrooms over and over again for drug offenses. These judges realized that traditional court proceedings weren’t working — they weren’t curing people’s addiction. Fines and jail time can’t cure a medical condition.”

Lawrence County launched its drug court last month, under the direction of Lawrence County Common Pleas Court Judge Andy Ballard, who took office last year.
Brown urged his colleagues in Congress to come together in a bipartisan way to support and expand these types of programs.