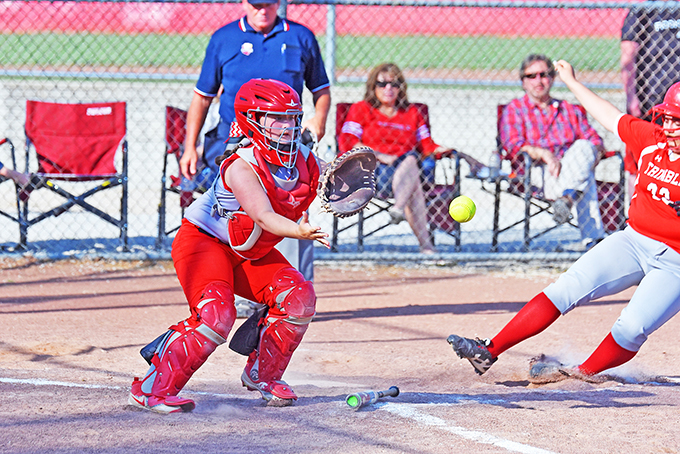 AID — There were three things the Symmes Valley Lady Vikings needed to do in Thursday’s Division IV sectional tournament championship game.
They did all three and they did them well, which meant a 9-1 win over the Trimble Lady Tomcats.
Sarah Kingery got the win as she scattered eight hits, struck out five and did not walk a batter in going the distance.
Taylor Webb led a 13-hit attack as she went 3-for-3 with a double, a home run and drove in three runs.
Emily Sharp was 3-4 while Rachael Hayes and Ericca Ross each went 2-4.
“We hit the ball hard but right at them a lot of times. We played good defense, pitched well and hit the ball. That’s all you can ask for in a tournament game,” said Lady Vikings’ coach Jeff “Odie” Estep.
Symmes Valley got a run in the first as Webb doubled and scored when Kara Saunders reached on an error.
The lead went to 2-0 in the third when Webb belted a one-out solo home run.
The Lady Vikings blew the game up with five runs in the fourth to lead 7-0.
Hayes and Kelsey, Gothard and Emily Sharp all singled for a run. Kingery was safe on an error as a run scored, Morgan Jenkins was safe on a fielder’s choice and Webb was intentionally walked to load the bases.
Kara Saunders then singled to right-center to clear the bases.
Trimble got its run in the fifth when Macinsey Cooper singled, Rhiannon Brown put down a sacrifice and Skylar Moore got a run-scoring single.
The Lady Vikings answered with two runs in the bottom of the inning.
Hayes reached on an error, Gothard was safe on a fielder’s choice, Sharp singled and Jenkins hit into a force play to drive in a run.
Webb capped the scoring with an RBI double.
Symmes Valley (17-8) will now play Peebles at 6 p.m. on Tuesday at the University of Rio Grande in the district semifinals.
Peebles beat New Boston 9-0.
Trimble 000 010 0 = 1 8 3
Sym. Valley 101 520 x = 9 13 0
B Lunsford and Kya Williams. Sarah Kingery and Ericca Ross. W-Kingery (K-5, BB-0). L-Lunsford (K-1, BB-0. Hitting-GT: Skylar Moore 2-3, T Lachey 2-3, Macinsey Cooper 2-3, Sydney Hardy 1-3, Rhiannon Brown 1-2; SV: Taylor Webb 3-3 2B HR 3-rbi, Emily Sharp 3-4, Rachael Hayes 2-4, Ericca Ross 2-4, Emily Estep 1-4, Kelsey Gothard 1-4, Kara Saunders 1-4.