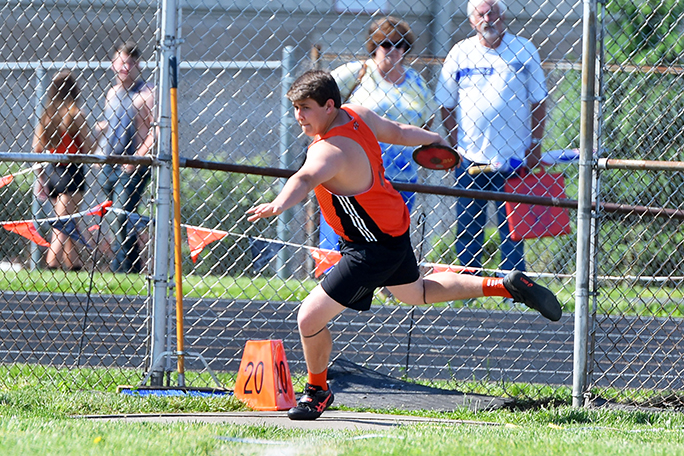 Ironton Fighting Tigers’ junior Hunter Humphreys prepares to hurl the discus. Humphreys was fourth on Tuesday on the first day of the Division II district track meet and earned a berth in the regional meet next Thursday. (Kent Sanborn of Southern Ohio Sports Photos)

ROCKSPRINGS — Day One of the Division II district tract meet produced some participants for Day One of the regional track meet.
The top four finishers in each event of the district meet advance to the regional meet Thursday, May 24, and Saturday, May 26, at Muskingum University in New Concord.
The second day of the district meet will be Saturday and could produce some additional regional qualifiers.
On Tuesday, Rock Hill’s 4×800 relay team of Victor Aguilera, Jasson Aguilera, Ethan Miller and Noah Wood ran an 8:33.53 time to finish third and earn a trip to the regional meet.
Warren had the best time at 8:06.17 with Sheridan second at 8:18.41. River Valley was fourth with an 8:40.05 time.
Ironton Fighting Tigers’ junior Hunter Humphreys was fourth in the discus with a distance of 133-01 and advanced to the regional meet.
Rock Hill’s Cameron Donohue was seventh with a toss of 120-04.
Chesapeake Panthers’ Cecil Fletcher will be moving on after he was second in the long jump at 21-01.75 behind Sheridan’s Ethan Tabor who leaped 22-02.75.
Fairland’s Robbie McFarland cleared 12-4 in the pole vault and was second. Brady Wilson of Chesapeake was fourth at 11-feet. Both will head to the regional meet.
Rock Hill’s Corey Shope was sixth at 11-feet.
In the girls’ meet, Fairland Lady Dragons’ Allie Marshall and teammate Ciarra Brown both advanced to the regional meet.
Marshall won the high jump with a lead of 4-11 while Brown cleared 4-8 and was fourth.
South Point’s Alexia Sharps was fifth at 4-8 but had more misses.
Fairland’s 4×800 relay team just missed advancing as the team of Deanna Hall, Haleigh Fuller, McKenna Pannell and Emma Marshall was fifth after posting a time of 10:45.78.