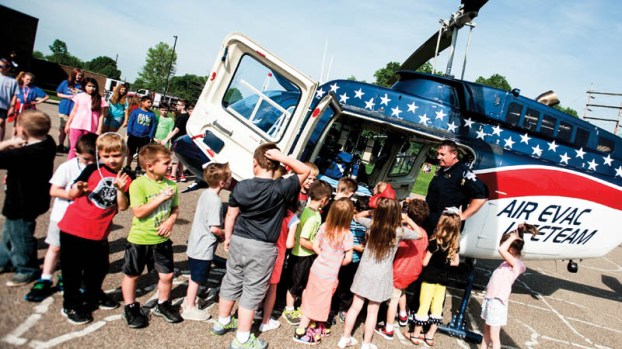 Brandon Best, with the Air Evac Lifeteam, shows off one of the helicopters to students from Burlington Elementary during Vehicle Day Friday.

Students at Burlington Elementary School and Ohio University Southern Child Development Center in Hanging Rock learned all about various types of transportation and jobs at this year’s Vehicle Day, which took place Thursday and Friday at the schools.

“We just get as many vehicles as we can so the kids can find out how they’re used for different jobs and things like that,” Lois Terkhorn, organizer of the Burlington event, said. “We don’t have it every year, so there’s always new kids who see it for the first time. We try to have it every two years.”

Some of the vehicles at the event included two helicopters, one from Air Evac and one from Health Net, a Lawrence County EMS ambulance, a firetruck from the Burlington-Fayette Fire Department, a hearse from Slack and Wallace Funeral Home, an AEP bucket truck and an Armstrong Cable bucket truck, a tractor, an RV, motorcycles, cruisers from the Ohio State Highway Patrol and the Lawrence County Sheriff’s Office, a snowplow from the Ohio Department of Transportation and more.

“We send notes home to the parents before the event, and a lot of them have contacts which gets the families involved,” Terkhorn said. “I think the kids really enjoy it.”

Terkhorn substitute teaches at Burlington Elementary since retiring as a teacher from the school, and still organizes the event.

Burlington Elementary School Principal Michael Clay said the event is important in exposing the students to different things outside of the classroom.

“I think the kids like it because it’s things they don’t typically get to see. These kids don’t typically know anything outside of school, so we need to make arrangements for them to be exposed to different things,” he said. “Not everything can be learned in a textbook or inside of the classroom, and sometimes you have to bring things like this to the kids.”

New plaque names those who have led the parade A plaque will memorialize all the people who have served as... read more