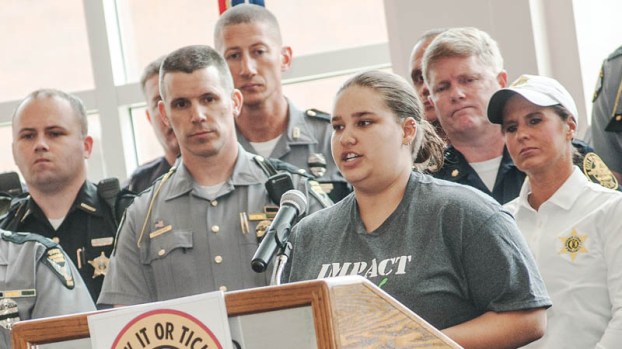 Ironton High School student Eden Silva, with Students Against Destructive Decisions, puts forth a challenge for students to pledge to wear their seat belts during a Click It or Ticket It campaign Tuesday.

Police urge drivers to buckle up

Law enforcement in Ohio, West Virginia and Kentucky are now well into a stepped-up enforcement effort regarding seat belt use.

On Tuesday, a few dozen officers gathered in the Mains Rotunda of Ohio University Southern to explain the Click It or Ticket campaign.

He said he often hears from people who ask, “Why aren’t you fighting real crime?” when they are ticketed for failing to use a seatbelt.

“For me there’s no bigger fight than to protect lives of those on our roadways,” he said.

Boyd County Sheriff “Bobby Jack” Woods recounted his own experience, crashing his cruiser, when he failed to wear a seatbelt.

He said he was ejected 88 feet from the vehicle, was unconscious for two days and missed months of work.

“We often talk about the lives we save, but one thing we miss, for those who survive, not only do they pay, but also their families,” he said of the ordeal relatives go through as a crash victim recovers.

Eden Silva, a student at Ironton High School, was there, along with members of school group Students Against Destructive Decisions, who are promoting the campaign.

“One decision, good or bad, can change everything,” she said. “Our goal is for every student to make it to graduation safely.”

She said people should wear seatbelts “every time, for every trip and in every seat in the car.”

“I challenge students to pledge to do this one thing,” she said.

SADD is advised by Christie McMaster at Ironton High School, who was at the press conference, along with SADD’s state coordinator Teresa Carper.

There will be a suicide awareness walk on Saturday morning. Called “Your Life Matters,” the walk is being held at... read more