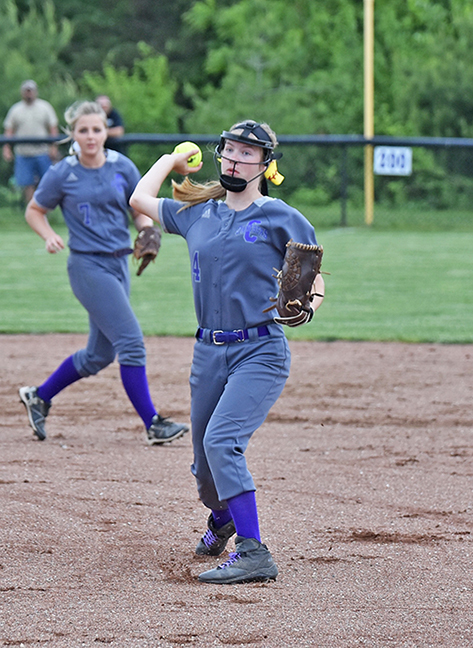 CHILLICOTHE — And the beat goes on.
The Chesapeake Lady Panthers continued their tournament run with a 10-2 rout of the top-seeded Westfall Lady Mustangs on Friday in the Division III district semifinals at Unioto High School.
“We came out and were aggressive at the plate. Any time you get 10 hits, that’s a good effort offensively,” said Chesapeake coach Aaron Rice.
“Defensively, we were making plays we should have been making and we got a well-pitched game.”
Erika Bowman was the winning pitcher as she gave up seven hits, struck out two and walked one.
Chesapeake (15-9) now plays Leesburg Fairfield at 1 p.m. on Saturday. Fairfield blanked Alexander 9-0.
Westfall (21-6) got a run in the first inning when Darby Minor reach on an error, Marcy Dudgeon got an infield hit, Emily Robinson bunted for a single and Josie Williams grounded out for the RBI.
Chesapeake came back to take the lead with four runs in the third inning.
Ashley Tackett got a one-out single, Katy Spears walked and Brooke Webb doubled to score the tying run.
Ryleigh Swann singled for the second run and then Lyric Bair smacked a two-run single.
Westfall got a run back in the bottom of the inning on a double by Dudgeon and a single by Robinson.
The Lady Panthers went up 6-2 in the fifth inning.
Swann singled, Bair had a sacrifice and Chloe Handley got an RBI double. Handley went to third on a wild pitch and scored on an errant pickoff throw.
Chesapeake put the game away with four runs in the sixth.
Spears singled, Webb reached on an error and Swann walked to load the bases. Bair laced a three-run double and then came home on a hit by Jordan Storms.
Bair was 2-2 with five runs batted in. Swann as 2-2 with an RBI and Webb was 2-4 with an RBI.
Chesapeake 004 024 0 = 10 9 1
Westfall 101 000 0 = 2 7 3
Erika Bowman and Katy Perry. Emily Robinson, Ayzia Fullen (3), Emily Robinson (7) and Makayla Terry. W-Bowman (ER-1, K-2, BB-1). L-Robinson. Hitting-CHS: Ashley Tackett 1-5, Katy Spears 1-3, Brooke Webb 2-4 2B rbi, Ryleigh Swann 2-2 rbi, Lyric Bair 2-2 2B 5-rbi, Chloe Handley 1-3 2B rbi, Jordan Storms 1-3 rbi; WHS: Ayzia Fullen 1-4, Darby Minor 1-4, Marcy Dudgeon 2-4 2B, Emily Robinson 2-4 rbi, Josie Williams 1-4 rbi.