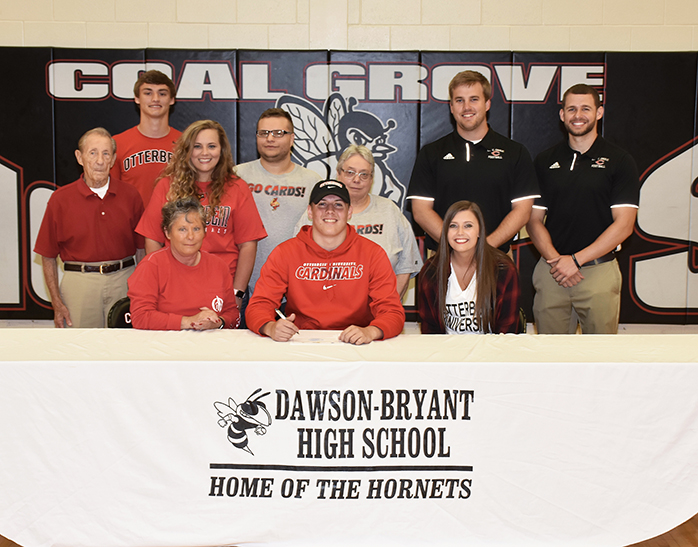 COAL GROVE — Jeb Jones was known for making good decisions on the football field. He also makes good decisions off the field as well.
Deciding between football and baseball as well as which college to attend were big questions for the Coal Grove Hornets’ senior All-Ohio two-way end.
But Jones made his choice relatively easy and that included signing a letter-of-intent Friday to play football for the Otterbein University Cardinals.
“I enjoyed baseball. I played over 500 games in my career. But there’s nothing like football. To go out there and hit someone and play for my community with my friends was great,” said Jones.
Capital, Malone and several other schools were part of the decision process. However, the fact his older sister Jacy is a starting guard on the Otterbein women’s basketball team did not play part in his decision.
“Jacy always egged me on, but she’s going to be gone in a year. Yeah, I’ll be able to spend a year with her, but I’ve got three others years. I can just see myself being a student there,” said Jones.
“That’s one thing my mom (Janet) said, ‘just be sure you can see yourself being a student because that’s where you’re going to spend the next four years.’”
Hornets’ head coach Evan Ferguson said Jones will be a big loss for his program to fill next season.
“Jeb was an amazing player for me to have this year. I always said I wish I had him one more year,” said Ferguson.
“He’s like a coach on the field sometimes. He just did so much for us. He’s been a leader on the field, in the school and in the community, I feel. Having a kid like that as part of your team really makes a coach’s job a lot easier.”
Jones is expected to lay tight end or H-back for the Cardinals. He said that even though he’s going to be a freshman, his chances are good that he might play early in his career.
Otterbein moved two tackles to H-back and the program has a history of starting freshmen.
“They play a freshman every year, so I’m hoping to be that guy,” said Jones who played in the Ohio North/South All-Star Game.
Obviously, we (begin practice) three weeks before the first game. I won’t get to play in the first game. I’ll still be learning, but over time I’ll be able to learn really quick and pick up stuff. I should be fine and do what they want.”
Ferguson said Jones will fit into the Otterbein system well. He said Jones had a high football IQ and Coal Grove ran some of the offense the Cardinals use.
“We ran some of that scheme with the H-back and he meshed with it well. He had some big games,” said Ferguson.
“I’m just so proud of him and whatever he does in the future. He’s going to excel whatever he does, not only sports and academics but in life. He’s just a great kid to have around.”
Jones plans to major in education and get a bachelor of science in chemistry.
“If I enjoy the sciences, I’m going on to medical school and get a doctorate,” said Jones.
Coal Grove won the Ohio Valley Conference in football and reached the Division VI regional finals with the help of Jones.
Besides football, Jones was a four-year starter in basketball and baseball. One personal perk was getting to play on a field named in honor of his late father John Jones.
“It was fun to play. Also, know that he was with you there every single step. It was an honor being able to show what he taught me through my years of playing,” said Jeb.
“It was a showcase what he did with me on the that field. To have the personal connection with that field was special. I’ve been over there working on that field with him. Every hit was for him. I pointed up to the sky every single time.”