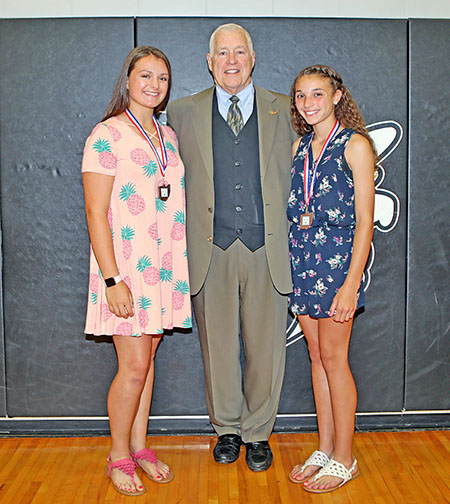 COAL GROVE — A special season was followed by a special day and a special speaker.
Ohio High School Athletic Association commissioner Dr. Dan Ross happened to drop in for the awards ceremony and presented several awards to the Coal Grove Middle School student/athletes on Wednesday.
Two of the award winners were eighth grade students Rylee Harmon and Kylee Thomas who capped their season by earning a berth in the state middle school track meet.
Harmon and Thomas both participate in four sports. Harmon does volleyball, basketball, track and softball. Thomas runs cross country, plays volleyball, softball and track.
“They are both not only quality athletes, but great students and great people. They’ve worked hard at everything they do. I’m very proud of them,” said Junior Hornets’ head track coach Rick Barrett.
Thomas won the Ohio Valley Conference Middle School 100-meter hurdles with a time of 16.71 seconds and the 200-meter hurdles at 30.03. Thomas owns the school record in both events.
At the state meet, Thomas was fourth in the 200 meters at 29.87 seconds but had a false start in the 100-meter hurdles.
“I was very nervous. It was pretty nerve-racking There were tons of people there,” said Thomas.
Thomas began running track in the seventh grade at the urging of track coach Rick Barrett and some other coaches.
“All my coaches encouraged me to just get on the track. They really helped me and encouraged me to work hard and get to state,” said Thomas.
“I didn’t think I’d really go to state. From seventh grade to eight grade I’ve really gotten a lot better. I know I decreased my time by a second and a half.
Harmon’s first and only season of track resulted in her winning the OVCMS shot put with a heave of 36-6 and earned her a berth in the state meet. She also set school records in both the shot put and the discus.
“I was going to do (track) last year but I was afraid softball would interfere. Mr. Barrett said we can work around your schedule and then he finally talked me into it,” said Harmon.
“I actually didn’t think I’d be very good at it. I am pretty athletic and can do a lot of stuff, but that really surprised me.”
Harmon threw 33-4.5 at the state meet and admitted that she was nervous but “Mr. Barrett calmed me down.”
Harmon plans to continue track and softball next spring.
“I’ll try definitely to do both since I did pretty good (at track) this year and it’s my first year,” said Harmon.