Adkins quite a find for UNOH softball 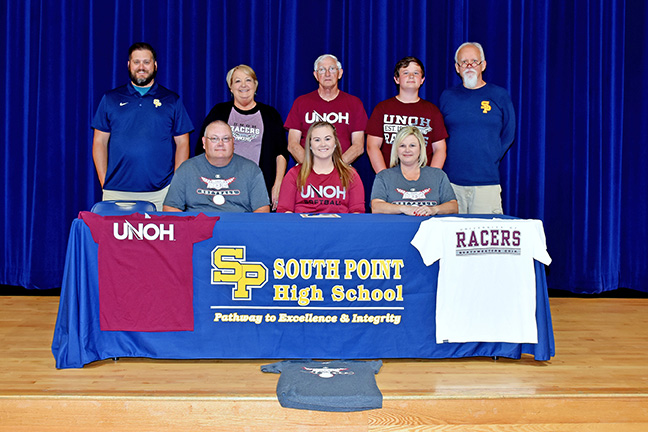 SOUTH POINT — Hey, look what I found.
The University of Northwestern Ohio Racers’ softball coach Tracy Coffman was sifting through recruiting videos and found someone she liked.
It turned out to be South Point Lady Pointers senior first baseman Laken Adkins who signed a letter-of-intent to play for the ONOH Racers.
“I had an app that helped me get recruited in softball. They actually found me first. The coach messaged me and saw my video of me playing softball and told me to come up to the school and visit and I did,” said Adkins.
“I really liked it and enjoyed it. I’ve always wanted to play college softball. I didn’t get into really playing until last year and I started sending out videos of me playing and that’s when I got noticed.”
Besides ONOH, Adkins checked into Notre Dame College near Cleveland and Daytona State College in Florida.
Adkins decided on ONOH became she plans to major in business administration and she liked their program.
“I think the business part is going to be really good for me because that’s what I want to do. I think I’ll fit in there,” said Adkins.
The Racers finished 31-14 this season and won their first-ever Wolverine-Hoosier Athletic Conference tournament title. They reached the NAIA Lawrenceville Regional semifinals.
Adkins — who began playing at the tee ball age — expects to continue playing first base at the next level.
“I’m a power hitter. I usually bat third or fourth in the order,” said Adkins who hit .390 this season for the Lady Pointers.
“I’m just going to have to keep working hard and do what I do best. I just have to work hard,” she said.
South Point head coach Tanner Heaberlin said there should be any problem with Adkins’ working hard at the college level. He said that’s the only way she knows how to play the game.
“She’s a great player. She came in and played some as a freshman because our first baseman got hurt. She got better every year and she’s always been a hard worker and done really well,” said Heaberlin.
“She has the work ethic to make it at the college level. She just has to keep at it and keep doing what’s she’s doing.”

CLEVELAND (AP) — LeBron James chose Boston as the place he’ll play next. Game 7 is on. And any talk... read more