Roberts finds what he wants with Rio Grande 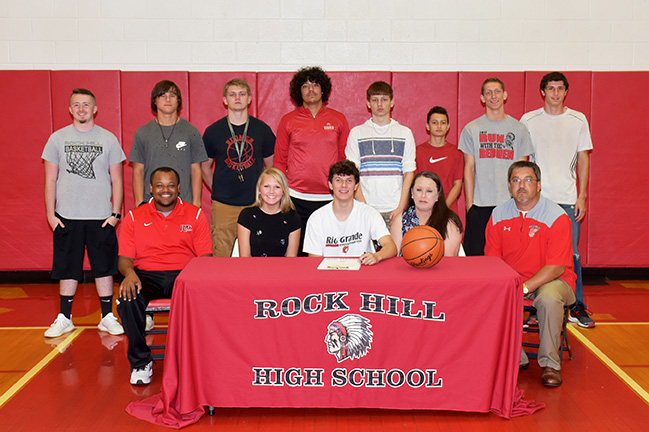 PEDRO — Cody Roberts went looking for a college to further his education. He decided to throw in a college where he had a chance to play some basketball, too.
The Rock Hill Redmen senior guard was sifting through colleges looking for a good exercise studies program in hopes of becoming a physical therapist. He found that school in the University of Rio Grande and he also found that they needed some basketball players.
“I was looking and their exercise studies were the best, and I wanted to play ball for another four years,” said the 6-foot-2 Roberts.
“It’s been a dream come true. It’s something I’ve wanted to do.”
Rio Grande assistant coach Len Collins said Roberts does have the ability to improve as he goes through the RedStorm program and could eventually end up on the varsity.
“Cody is a kid who reached out to us and I had some tap of him with Portsmouth games and other conference games,” said Collins. “He’s a lefty who will work and do whatever he can to get on the floor.”
Roberts is optimistic about his chances at Rio Grande but he knows there is a lot of work ahead.
“It’s going to take a lot of hard work. It’s definitely different than high school, but I’m ready for it,” said Roberts.
Len Collins compared Roberts for former Ironton and Rio Grande standout Travis Elliott.
“At the college jayvee level, you never know what can happen. Travis Elliott went from jayvee to varsity captain. He averaged 30 points a game as a jayvee play. He was an academic All-American. Cody can be that kind of kid who is a diamond in the rough. The sky is the limit for him,” said Collins.
Gordy Collins took over as the Rock Hill head coach this past season and he saw a lot of potential in Roberts.
“Cody’s a really good athlete. He’s really aggressive. It’s just a case of you bring in a new coach and it’s a whole different philosophy than what he’s used to,” said Gordy Collins.
“I think he’ll excel and not just as a basket all player but as a student. That’s my biggest goal with these kids is to make sure they get a college education.”
Roberts said Rio Grande welcomed him with open arms.
“I love it. It’s a great environment, great teammates. It just seems amazing,” said Roberts.
The former Rock Hill guard said he will be used either as a point guard or a shooting guard.
“That’s what I’ve played all throughout my years. I prefer shooting guard. I’ve been working with my old coach (Gordy Collins) trying to get my shot off quicker,” said Roberts.

Adkins quite a find for UNOH softball