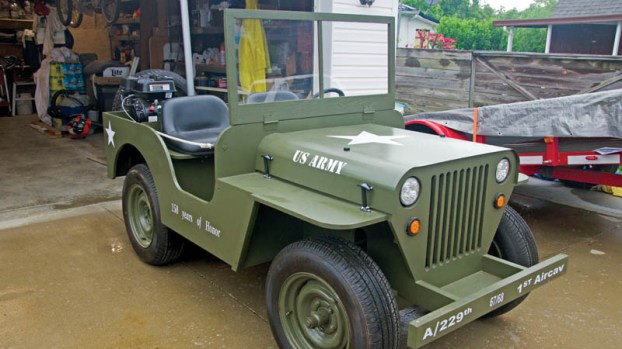 A replica wooden Jeep, which appeared in Monday’s Ironton-Lawrence County Memorial Day Parade, was constructed by Dean Robinson, of Ashland.

The miniature green replica Jeep, which this year sported the slogan “150 Years of Honor,” was built and driven by Dean Robinson, of Ashland, Kentucky.

Robinson, a Vietnam veteran, said he constructed the Jeep in 2015 after seeing another like it.

Following a builder’s book, Robinson purchased five sheets of plywood from Patton Lumber in Ashland. He said it took four and a half sheets to finish the job in his garage.

“It’s all screwed and glued together,” he said. “It was built right where it’s setting.”

This year, Robinson drove the vehicle in Division 2 of the parade. He has also entered into Ashland’s Christmas parade.

He said the Jeep has a 7 horsepower Honda engine, geared to run at 10 miles per hour.

“Then it can go up bank in south Ashland,” he said.

Altogether, it took about three months to build. Robinson said the home made vehicle can be driven “anywhere a golf cart is legal.”

Robinson plans to participate in the Christmas parade again this year. He said he has built a three by six feet trailer to attach for that occasion.

“I’ll use it to pull some kids around,” he said.

Kids fishing event will be Saturday

Special Needs Youth Sportsmen to host activity CHESAPEAKE — There will be a fishing event for children with special needs... read more