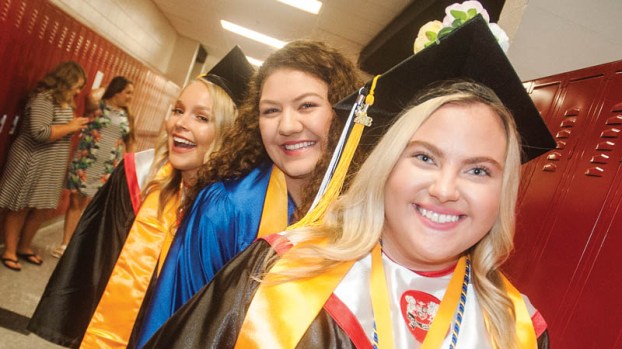 Friends Cassidy Blum, left, and Caitlin Robinson, photobomb their friend, Olivia Higgins, during an interview before the start of commencement exercises Sunday at Dawson-Bryant High School.

Principal Dean Mader said the Class of 2018 has been a good group.

“They’ve been really successful, academically, athletically, musically,” he said. “They have done some things historically that no class has accomplished before.”

He said they were the first class to have a home playoff football game, go to regionals in football and basketball and had the first girls’ softball team win the Ohio Valley Conference. They have also had superior ratings at band competition.

“It’s been a really talented group,” Mader said. “They’ve earned $1.3 million in scholarships and 700 hours of college credit. So they have performed well in the classroom and on the field.”

He said that his wish for the class is to be successful in life.

“I think we have helped lay a good foundation for them to build on,” Mader said. “So, I hope they look back here with fond memories and go on to bigger and better things.”

Olivia Higgins is graduating with a 4.0 grade point average and honors with distinction.

She said she is excited to graduate.

“Kind of nervous, but mainly excited,” she said. “I am excited just to start my life and go to college and go away for a little bit. I want to explore and see what God has in store for me.”

Higgins is going to attend Eastern Kentucky University in Richmond, Kentucky to study communication sciences and disorders so she can pursue a career in speech pathology.

She said she is sad to leave her friends.

“I am sad at leaving behind what I am so used to,” Higgins said. “So starting a whole new life is kind of scary, but I am excited.”

Jeb Jones, the class vice president is graduating with a 4.0 grade point average, honors with  distinction, an All American Chemistry cord and is a member of the National Honor Society.

Before the graduation, he was nervous because he was preparing to speak during the commencement ceremony.

“I’m kicking the thing off,” he said. “But I am excited to graduate and see what my life holds for me. I am going to miss my friends and sports.”

He is going to Otterbein University in Westerville to study education and get a Bachelor of Science degree in chemistry.

ROME TOWNSHIP — Seniors from Fairland closed out their high school chapters this past Friday, as the Class of 2018... read more