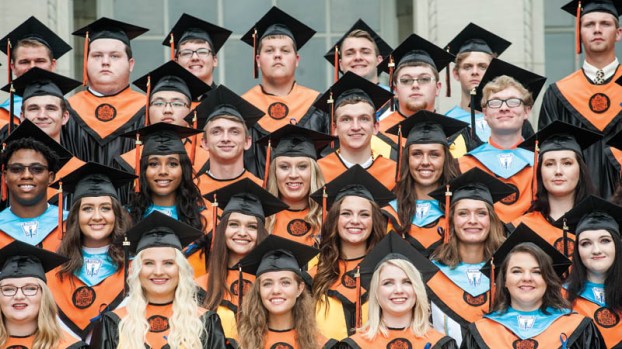 Students from Ironton High School pose for a class photo on the buildings front steps before the start of commencement exercises on Sunday.

As students gathered on the steps of Ironton High School on Sunday for their Class of 2018 picture, there was a mix of being ready for the future and starting to miss a school that had been such a large part of their lives.

He will be headed to the Kentucky Christian University to study Bible/ministry. He was the Spanish Club president, is a National Honor Society member, Math and Spanish Honoraries, a member of the baseball and bowling teams, and a member of the Math, Spanish, Science, Key and Impact Clubs. He was selected as part of the WSAZ “Best of the Class.” He was award the Lusby Excellence Award for Christ, Character and Career scholarship.

“I think the thing I am going to miss the most is seeing my friends everyday,” he said.

Elena Wilson said she was excited to graduate.

She will be attending Ohio University to major in biology – pre-medicine. She was the National Honor Society president, a cross country and tennis team member, Math Honorary, Math Club vice president and a Science, Impact and Key Club member. She was awarded the Promise, Ohio Distinction, Ohio Success and Ohio Pathway scholarships.

She said she thinks the saddest part is that she knows the next step of college is going to be tougher than high school.

“I think the saddest part is that the class work is going to be tougher in college,” Wilson said. “I am not looking forward to that.”

Alison Franz was ready to graduate.

“I’m so excited,” she said. “I can’t wait to get out into the real world and try new opportunities and experiences. I will definitely miss twirling and dancing, I was a majorette, so I am going to miss that and of course, all my friends.”

She was the Senior Class treasurer, National Honor Society secretary, a majorette and captain of the Guard, a Million Dollar Marching Band member, a Varsity Singer, musical cast lead, a Robotics Team member and a College Credit Plus participant. She was awarded the CU Faculty Excellence scholarship.

She is going to Cedarville University to study civil engineering.

“I want to design a bridge that will actually be built,” Franz said.

Assistant IHS principal Jeff Hairston said there were a variety of things that made the Ironton High School Class of 2018 special.

“The behavior is outstanding, they have a tremendous attitude, and best of all, they have a really solid work ethic,” he said. “I look forward to them going forth and doing all their future endeavors with that same work ethic. I am very proud of all their accomplishments and their  hard work.”