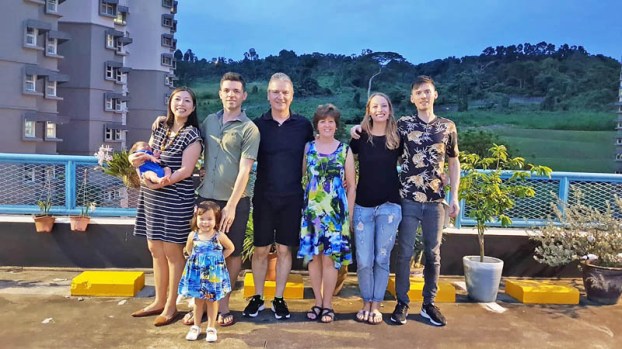 SINGAPORE — It appears that President Donald Trump wasn’t the only American celebrity surrounding the peace talk summit this past week.

Albeit not the same magnitude, South Point native Zach Smith was in a smaller spotlight as he drew attention from the local media.

A local Asian news network was looking for Americans in Singapore for their insight and opinions regarding the historic summit between the United States and North Korea.

Smith lives with his wife, Janice Quek, and his two-year-old daughter, Ayla, and three-week-old son, Myles. During his 11 years living in Asia, Smith has lived in Singapore for eight of those years.

Smith graduated from Liberty University and then did his graduate studies at The National University of Singapore. He worked for two and one-half years with a Singaporean renewable energy company in Sri Lanka, an island near India in the Indian Ocean.

But with a family and so much travel, life got busy and Smith decided to settle on a more stable routine and better environment that would benefit his family by returning to Singapore.

“I’m glad the summit brought Singapore into the public eye more than it has. It’s a very small country. It was good just for people to learn more about Singapore, which is actually far away from China.”

Singapore is a sovereign city-state and island country in Southeast Asia at the equator.

Temperatures are always in the 90s with high humidity and a large amount of rainfall.

With a population of 5.6 million, Singapore is a nation of people who are of mostly Chinese, with large minorities of Indian and Malay population.

“English is the main language of school, business and government. They require everyone to take at least one other language,” said Smith.

Smith is currently teaching Social Studies at an international high school and works as a program coordinator for education and community service travel to other countries.

The school has an American curriculum with many American students, but also has significant amounts of Korean, Filipino and other nationalities. Even some Singaporeans attend the American-style school.

In reference to President Trump: “It’s the same here as in America. There are some people who like him, some people who don’t. You can’t use the word consensus when trying to describe the opinion of him. He’s more polarizing than (former president Barack) Obama,” said Smith.

“Anybody who is globalist is more popular overseas, compared to a nationalist like Trump,” he said. “But the fact that the summit even happened is far better than shooting off missiles.”

Smith said his opinions are based on what he reads more in the international press rather than news outlets in the United States.

“I haven’t lived in the U.S. since George W. Bush was president. My opinions are more removed from the people there. Whatever had to happen to make this summit occur is good,” said Smith.

“As far as Trump himself, I don’t have a conventional opinion. For example, I’ve lived as an immigrant for a while now. So, I wish for more sensitivity in how he communicates things.”

Smith said that Trump’s personality and the manner his policies are presented have a lot of legitimate immigrants and potential tourists starting to shy away from coming to the United States and looking to other countries such as Australia.

“They just hear things that are blown through the media and they get that impression of America. That’s why I wish Trump would be more careful,” said Smith.

The situation in North Korea is a concern for the people in Singapore and other countries in Southeast Asia, as is their concern regarding China. The success in dealing with North Korea — and with China — will affect the opinion of these countries with  Trump as an international statesman.

In Southeast Asia, countries, China is perceived as “a huge bully” said Smith. People like Trump’s stand, but he said Trump needs to proceed with caution.

Smith said that he’s seen how the Chinese government doesn’t play fair and he’s hopeful the peace and trade negotiations reach a successful agreement. But he said the media spin is different depending on which country’s reports people read.

“In (Southeast Asian) media reports, the Trump-Kim summit was a great success and is a great path to peace. The New York Times says Trump was outnegotiated by Kim,” said Smith.

“I like living overseas. I get access to a lot of countries media. I read other outlets and then go and check the United States coverage.”

“People over here have no chance of understanding America. They’ve nothing real to base it on. America is the loudest nation, but we’re also the most misunderstood.

Hollywood is the primary source of their imagination about (Americans),” said Smith.

Politics and media coverage aren’t the only differences between the countries. Smith said there is a misconception that the United States’ education system is lacking and, as an educator, he disagrees.

Smith said the people in much of the Asia area believe the best path to success is to get into an American college and that means to get an American education for high school.

“America isn’t behind in education. (The U.S. does) more harm to try and match Asia in test scores. We need to focus on what we do best — creativity and innovation. I will definitely send my kids to American schools,” said Smith.

“There is one thing I wish America would learn. I did my graduate work here. The Geography Department where I studied at the National University of Singapore is ranked among the top 10 in the world. It costs $2,000 per semester. Education is far more affordable. The average student debt is $35,000 in America. They hire the top professors from all over the world world here and they can still offer an affordable education.”

For Smith, life in Singapore is a family affair. His younger brother, Benji, was hired to teach music at the same school where Zach is returning to teach.

“Benji was working as a musician in the U.S. The school had an opening, and I called my brother and said ‘If it’s tough being a musician there at home, why not come teach music here where you can leverage ‘authentic American rock-and-roll’ credentials?’”

Benji’s wife Chelsey, a Rush, Kentucky, native, will also be starting a position as a literature teacher on the same campus, too.

Although Smith enjoys his life in Singapore, he said he wants to return to the United States when he retires or possibly sooner and utilize what he’s learned.

“I’d like to come back eventually and start to contribute to the Tri-State area with some new ideas. It’s those fresh ideas and new blood that the Tri-State needs to go forward into the global economy. I think about returning back home, but for right now I’m happy in Singapore,” said Smith.

Man talks about raising autistic child Bill Jordan’s son, Allen, has autism, and he said he wouldn’t like to have... read more