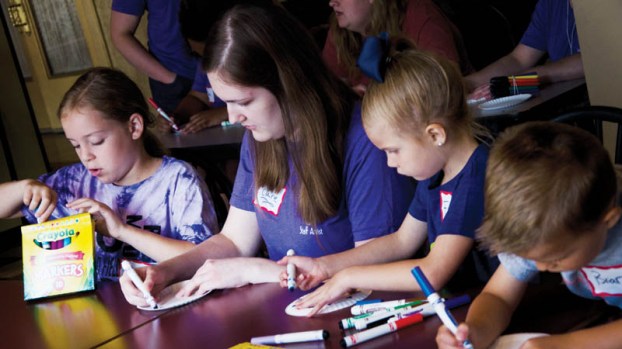 Instructor Claire Wilson helps students make sombreros in the “Around the World” class at the 2018 summer camps at the Paramount Arts Center in Ashland.

ASHLAND — Summer camps got under way at the Paramount Arts Center on Monday, giving students a chance to continue learning and be creative in a variety of fine arts fields while school is out.

The center offers the sessions each summer to all ages up to 18 in three week-long sessions.

The first series of eight classes runs until Friday and features drawing, dance, crafts and other options.

In the basement of the theater, instructors Matt Hammond and Jeremy Webb were teaching “Be A Hero” to ages 7-15, centered around comics and superheroes.

“This is a new class,” Emily Prichard, the camp manger, said.

“We added a few. They’ll be drawing and creating superheroes, making costumes and doing a skit.”

One of the students taking the class was Leah Virgin, 7, of Russell Primary School.

She said it was her first time attending camps at the Paramount.

Upstairs, instructor Nancy Adams was teaching “Drawing with Color,” teaching a group of about 15 students, beginning at age nine, how to draw realistically and incorporate the fundamentals of color into their work.

Also offered was “Around the World — Get Your Suitcase Packed,” by instructor Claire Wilson.

Monday’s class centered around Mexico and the children were making sombreros.

Classes are offered in the mornings and afternoons and run for about four hours each, she said. Snacks and lunch are provided. Registration is still open for the sessions that start on July 9 and July 16, as well as those currently underway.

Prichard said scholarships are available to help pay for the cost of the classes and those seeking one can mark it on their application.

In addition to the weekly classes, the centerpiece of the summer camp is two-week production camp, beginning July 20 and open to ages 7-18, which gives students an education in the theater. After learning how to put a show together, the class will perform a musical for the community on the final date.

This year’s production will be The Addams Family, set for Friday, July 20 at 7 p.m.

For more information on the camps, visit www.paramountartscenter.com, or call 606-324-0007.