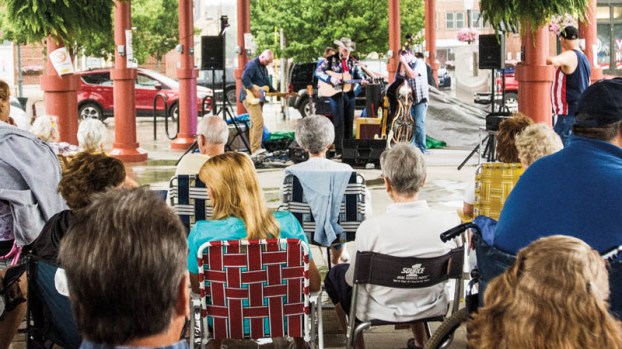 For six years, Ironton aLive has been bringing the music of local artists to downtown Ironton with its Tuesday Night Concert series.

The most recent was Kentucky’s Rob McNurlin who splits his time between Greenup County where his family lives and Nashville, where he hangs out with country stars like Marty Stuart and John Carter Cash.

And when the weather turned rainy on Tuesday, rather than stop the concert, the band moved the equipment under the roof of the pavilion at Farmers Market and the people moved their chairs so the music could continue to play.

Sam Heighton, executive director of Ironton aLive, said the weekly concerts are a big draw, bringing in between 100-300 people.

When asked whether it is the musical genre or the musician that brings people in, he said it was both.

“Some people come because they like one type of music, other times it is because they are big fans of the singer or the band,” he said. “And we have people who come week after week.”

Heighton said the reason the Tuesday Night Concerts are so successful is because of two things.

“It’s free and people love the setting,” he said. “If we move it into the Ro-Na Theater because of the weather, we lose people because they like being outside where they can see what is going on.”

Heighton said the concerts’ secret weapon is John Griffiths, owner of Studimo. He’s the one who books the musical acts and runs the sound equipment.

“He started off with Billy Ray Cyrus and toured the world with him for 20 years,” he said. “That’s where he got his experience. He still does concerts all over the country.  He lives here in Ironton, so we are lucky to have him.”

Upcoming acts include Duane Flescher Orchestra next Tuesday. The series will take a break on July 3 because of the Fourth of July holiday. It resumes on July 10 with Larry Whitt and the Blue Eyed Soul and The Westwood Troubadours on July 17.