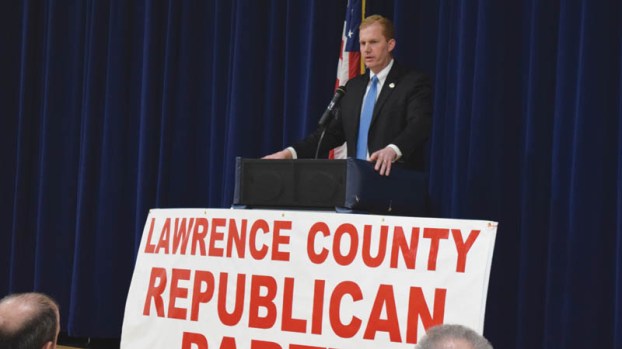 Earlier this month, Rep. Ryan Smith was named speaker for the Ohio House of Representatives, and officials representing Lawrence County are hoping that having a person from the southern part of the state in leadership could be a help to Lawrence County.

Smith, 45, a Republican, is from Gallipolis and has represented the 93rd legislative district, which includes Jackson and Gallia Counties, the majority of Lawrence County and a portion of Vinton County, since 2012.

On June 6, Smith, who previously served as finance chairman, was elected to lead the chamber, following the resignation of Speaker Cliff Rosenberger. He prevailed after weeks of impasse and 11 rounds of voting. Smith will lead the chamber through the end of the year. The Republican caucus will host another vote after the November elections to determine who will lead the chamber in the next session.

Hayes said he contacted Smith a year ago about the need for a new facility for the Chesapeake-Sybene Senior Center.

“They needed a place where they can have three meals a day,” Hayes said.

He said Smith, working with State Sen. Bob Peterson, who represents Lawrence County and the surrounding region, was able to secure the needed funding.

“They were able to get $1 million through,” Hayes said.

The appropriated funds will pay for the construction of the new senior center, which will be located at the Lawrence County Fairgrounds. Hayes said they will also pay for a new EMS station for the eastern portion of the county, new bathrooms for the fairgrounds and will help pay down the $300,000 loan on the barn at the site.

“I think it’s great,” he said of his taking leadership. “We’re proud of him and glad he’s our representative.”

Stephens said Smith has “worked really hard” for the district and that it had been some time southern Ohio had a representative in House leadership.

The last was Democrat Vern Riffe, of New Boston, who served two decades in the position before retiring in 1995. He was the longest serving speaker in the state’s history.

Riffe, who died in 1997 at age 72, is credited with directing funds for development projects to the impoverished southeast portion of the state, including the creation of Shawnee State University in Portsmouth. He sponsored the bill that authorized creation of the university in 1986, which now has a center for the arts named in his honor.

U.S. Rep. Bill Johnson, R-Ohio, whose congressional district covers the Appalachian region of the state including Lawrence County, said he holds Smith in “high regard,” and that he communicates with him frequently.

“I think it’s good for southeast Ohio,” he said of the new speaker.

Johnson said he has been committed in Congress to making sure the rural parts of the country are heard from and he hoped Smith could do the same in Ohio.

“Southeast Ohio has not been on everyone’s minds,” Johnson said. “I’m glad to see it. It’s going to be helpful.”