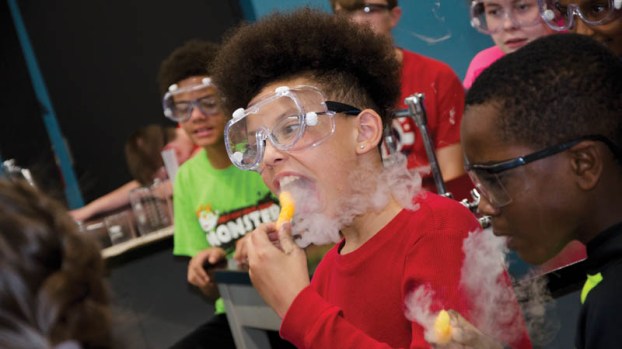 Instructor Joe Hamden used liquid nitrogen, which has a boiling point of −320 °F, to freeze the various food items.

“We’re studying molecules in motion,” he said. “We’ve already shattered a banana and we’re going to do a watermelon.”

Hamden said the liquid nitrogen slowed the molecules in the items, making them fragile.

He passed around marshmallows that had been dipped and, as the students bit into them, the fog from the process emitted from their mouths as they chewed.

Hamden said the students would also be making Dippin’ Dots, by flash freezing drops of ice cream in the liquid nitrogen.

“Most kids know what happens when you heat something up, but they don’t get to play with liquid nitrogen,” Hamden said of the freezing experiments.

STEM+M school director Jayshree Shah said a few of the eighth grade students in the camp are lined up to attend the school when it returns for classes in August. She said a few students were also assisting Hamden with the camp.

Hamden, who goes by “Mr. Joe” and wears a psychedelic print labcoat, is a professor at Marshall University’s College of Science.

He regularly appears at events at local schools, conducting experiments and sharing knowledge.

“The kids are learning here and having fun,” he said.