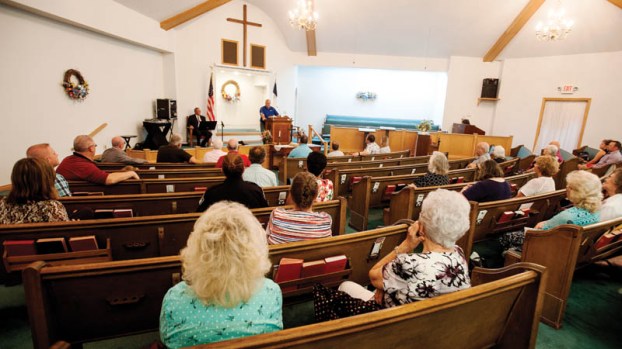 A call for healing

Members of several congregations gathered on Tuesday at Calvary Baptist Church to pray for the country.

A “Healing Our Nation” rally took part at the church to pray for the military, first responders, the youth and others.

“We’re trying to lead our nation back in the direction to God,” Michael Murphy, the director of the event, said.

About 50 turned out, including Ironton police chief Pam Wagner and Mayor Katrina Keith.

The main speaker at the event was the Rev. Jeff Cremeans, of Ironton City Welfare Mission, who works to provide meals and clothing to low-income residents in the region.

Murphy said this was the fifth year for the event, which featured about eight pastors and members of their congregations.

He said the theme of the event was taken from 2 Chronicles 7:14, which reads, in the New International Version, as “If my people, which are called by my name, shall humble themselves, and pray, and seek my face, and turn from their wicked ways; then will I hear from heaven, and will forgive their sin, and will heal their land.”

A Bible was given to Keith by the group.

“The mayor has supported us and has great concern for the spiritual needs of the area,” the Rev. Tim Maddy, of Pine Grove Free Will Baptist Church, who hosted the event, said. “This is to show our appreciation.”

Wagner, who accepted on behalf of the mayor, who arrived later, offered her thanks to the group.

“It pleases me to be here,” she said. “I thank you from the bottom of my heart. This nation truly needs healing. Please pray for the boys in my police department, our sheriff’s department, our first responders and our fire department.”

One of those speaking was Mark Maynard, of the group Amy for Africa, which he founded with marathon runner Amy Compston, of Ashland.

The missionary organization fundraises for Christian-based schools in Uganda, including one that was just constructed.

Also speaking was Rick Sturgill, of Real Life Ministries, who addressed the drug addiction crisis in the region.

Sturgill, who lost his 19-year-old son to a heroin overdose in 2000, spoke of the work his ministry has done. He said recovery groups have grown in the region since his son’s death at the beginning of the crisis and said more is being done to help those who are addicted.

“I want to thank our judges for finding alternate ways to deal with the problem, instead of just throwing them in jail” he said. “Pray for us as we continue to work with people in recovery, those who are addicted and have lost their jobs and children.”

Keith was asked to lead the group in prayer.

All creatures great and small