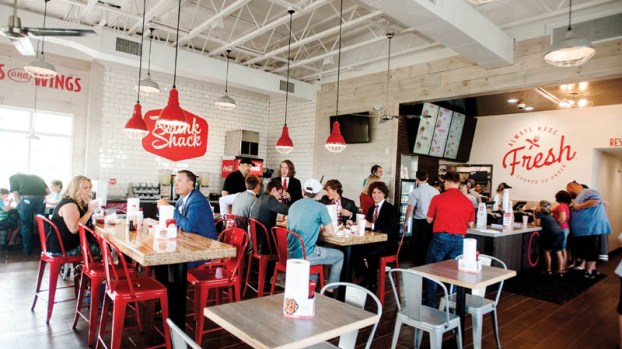 Patrons eat lunch at Slim Chickens on Monday for the restaurant's opening day. Slim Chickens is located on Carter Avenue in Ashland at the entrance to the Ashland Town Center.

ASHLAND — A new restaurant specializing in chicken dishes opened on Monday near the Ashland Town Center.

“I was looking for a chicken place, and I was originally looking into another franchise, but flew up to Illinois to try some of Slim Chickens’ food,” owner Tom “TW” Wright, said. “It was extraordinarily good, and a good southern menu for Kentucky.”

Wright said that his group, along with business partners Randy and Ann Vanover, opened a Slim Chickens in Pikeville, Kentucky this past November, and wanted to open the franchise in Ashland.

Wright said that in addition to Slim Chickens, his group also owns Penn Station, Moe’s Southwest Grill and a few other places in Ashland as well.

“We have a history of trying to bring new concepts to town,” he said. “About 15 or 16 years ago, we put Penn Station in, and about a year after that we opened Moe’s. Rural areas are typically the last to get new things, but we’ve proven that we are able to do that.”

Currently, the Ashland Slim Chickens has about 50 employees.

“I think people really like the southern menu, our chicken is totally fresh and lightly breaded, and we have an array of sides that go really well with the chicken. It’s a great menu with great food” Wright said. “People will really enjoy the product, service and it’s easy to get in and out of.”