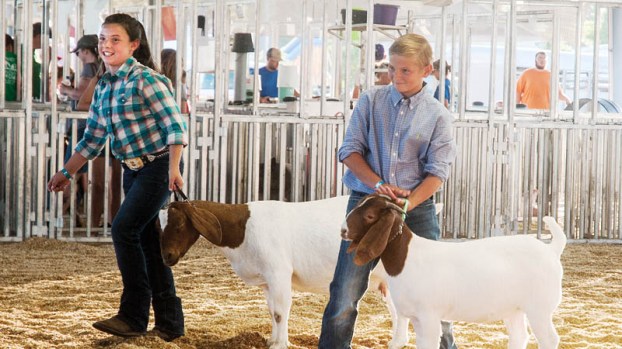 4-Hers present goats on first day of fair

ROME TOWNSHIP — 4-H members exhibited their animals in the Dairy Goat, Pack Goat, Pigmy Goat and Breeding Goat Show on the opening day of the Lawrence County Fair on Sunday.

Serving as judge for the competition was Yvonne Blosser, who is a veteran of the field, having judged shows nationwide.

The sole entry for dairy goats was Benjamin Skaggs, 10, who earned the title of grand champion in the category.

He is a member of Clodhoppers 4-H Club, based in the Ironton area. He is in his second year of competition.

“Awesome!” he said, when asked about how he felt getting the trophy.

In the category of pygmy goats, Bailey Fuller was the grand champion, with Griffin Fuller named as reserve.

“It feels really good,” Bailey, 10, a Rock Hill student and member of Gingham and Denim 4-H Club, said of her win. She said she also won grand champion in the tobacco category at Saturday’s pre-fair events.

In the category of meat production doe, Kara Wilson, 11, of Kitts Hill and Willing Workers 4-H Club was grand champion.

Named as reserve in the category was McKenzie Klaiber, of Gingham and Denim 4-H Club.

“Hard work pays off,” she said.

In the showmanship competition, awarded for presentation skills and ability to handle the animal, Gracie Daniels, 14, of Over Yonder 4-H Club and Green High School, took first place overall in the senior completion.

Dylan Back won second place in the senior category.

In the junior category, Isabella Kerns, 11, of Ironton Middle School and the Over Yonder club, won first place overall.

“It feels good, but I wanted Morgan to win,” Kerns said of her fellow club member, Morgan Gleichauf.

At 12 years old, Gleichauf also attends Ironton Middle and was competing at the fair for the first time.

He was satisfied to place high on his first attempt.

Blosser said she was impressed with what she saw while judging the competition.

“I really appreciate the effort that went into these animals,” she told the crowd, congratulating the participants on their skills.