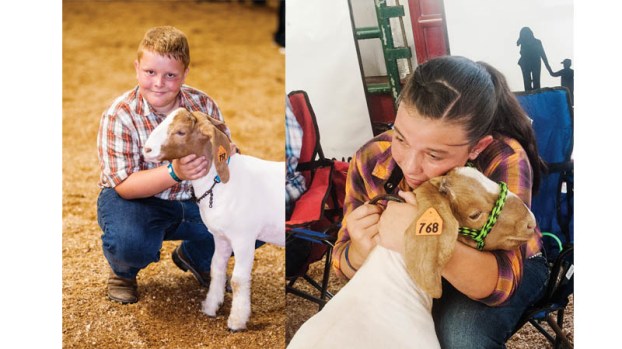 All in the family

The Daniels family made quite the showing at the 2018 Lawrence County Fair’s market goat show and showmanship competition.

It was also a good night for the Over Yonder 4-H Club. This is the first year for the Franklin Furnace area club, and their members took the top awards in both shows.

Rachael Fraley, the Ohio State University Extension educator and 4-H youth development educator for Lawrence County, said it isn’t unprecedented for one club  to take all the top spots in a show.

“All the 4-H kids work extremely hard,” she said.

Kerns was first in division 9 and was the division 9 champion in addition to taking the overall championship. She said she was still trying to figure out how she felt.

“I’ve never won grand in my life,” the 11-year-old said. “Well, I won it in breeding, but never in the weathers. I have a whole bunch of emotions, I’m happy I won, but I am sad because my goat will have to go. I don’t really know what I feel right now.”

Gracie Daniels had two goats in the market goat competition and took first in division 8, second in division 9, and was reserve champion of division 3.

She said she was very excited to win.

“I’ve never won reserve overall,” the 14-year-old said, adding that raising goats is hard, but her brothers helped her out. “It’s easier when you have family helping.

The 10-year-old was happy to win junior showman.

“I’ve been in 4-H for two years,” he said. “I didn’t expect to take junior showman. “I was hoping to get at least reserve, so I am happy.”

“It’s awesome,” he said, of winning the senior division for showmanship. The 16-year-old has been showing goats at the fair for eight years. “I thought I was going to get second, honestly.”

The Daniels kids all have experience with goats since their family raises them at Daniels’ Show Goats. They’ve had to help raise about 60 goats this year alone.

Their mother, Jessica Collier, was very proud of all her kids for their win.

“So very happy,” she said. “I told Garrett that he’ll have to sleep with one eye open tonight because of his sister. They have a big rivalry going.”

ROME TOWNSHIP — Every fair offers a plethora of cuisine that you can only get in the setting. The 2018... read more