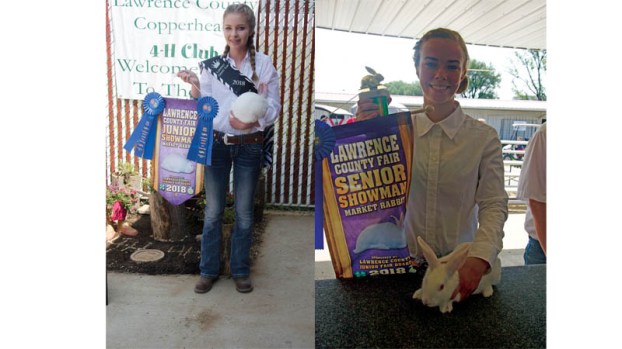 Runnels, a member of Greasy Ridge Gang 4-H Club is a student at South Point Elementary.

“This is my first year,” she said of her participation in the event. “I’m very excited.”

Coming in as reserve champion was Jacob Freeman, 19, of Scottown Farmers and Farmerettes 4-H Club.

“I’ve been doing this as long as I’ve been old enough,” he said.

At 18 in 4-H years, this is his last year of eligibility to compete. He said this was his first time winning one of the main honors.

While Wednesday’s event was for the animals themselves, Thursday’s showmanship competition was based on the member’s ability to handle and present them.

She is a junior at 6 Akers Farm Homeschooling Academy and is also this year’s fair princess.

Named junior showman was Brea Belville, 14, of Starlite 4-H Club. She is a freshman at Symmes Valley High School and was first runner up as fair princess this year.

“This is my second year getting junior showman,” she said.

In addition to winning in categories in the rabbit show, she also placed in the chicken competition on Saturday.

With many entrants, the two-day rabbit show is one of the largest competitions at the fair each year.

Runnels, 18, who is this year’s fair queen, is a member of Greasy Ridge Gang 4-H Club and a Fairland High Graduate. She is Peyton’s older sister.

Runnels won the junior doe completion and has a history of taking top honors in the show.

McComas said she has been raising rabbits since she was 10 and was last year’s reserve champion in breeding.

Having reached the 4-H age of 18, this is her last year to take part in the county fair.

“I’ll continue to take rabbits to the state fair,” she said of the Columbus event, which is an open competition.

The senior showmanship winners of Thursday’s event will go on to compete in the showman of showmen competition at 9 a.m. today, in which participants will present various animals to a series of judges.