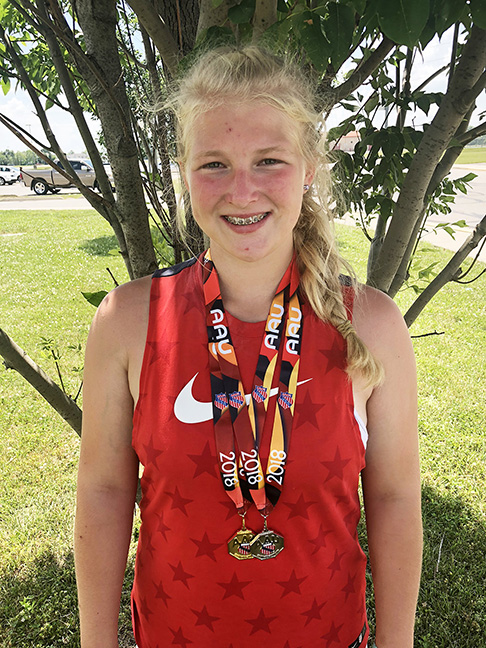 Emma Hall and her medals

Life is full of irony. Just ask Emma Hall.
A freshman to be this fall at Ironton, Hall was a softball player who was reluctant to run track simply because “I don’t like running a lot.”
Now days, Hall has a two-hour daily workout that includes running and throwing. Not only that, her mother Nikki has added kick boxing to improve leg strength.
So why all this change in her thinking?
Hall has found a hidden love for track and it centers around the shot put and discus.
The workouts and throwing under the tutelage of Ironton Elementary School principal John Maynard have made Hall a qualifier for the AAU Nationals at famed Drake Stadium in Des Moines, Iowa, this month.
Hall won at a district meet in Charleston, W.Va., on her final throw, then won the shot put and was second in the discus in the regional meet at Grove City to punch her ticket to the national finals.
Hall threw 101-feet, 8-inches in the discus at Charleston but her 32-feet, 8-inch heave won the shot put.
In the regional meet with temperatures climbing into the 90s and causing competitors to wilt, Hall threw the shot put 34-feet, 11 and one-half inches to win the event by one-half inch.
“The (Charleston meet) I was a little bit nervous because I wanted to get a good throw in to qualify and get a good ranking and I didn’t do too good until my last throw and I finally beat my PR (personal record),” said Hall.
“When I went to Grove City, I was still a little bit nervous but not as bad as I before. I didn’t do too well but I still tried. I think the next one in Iowa is going to be my meet when I just going to throw because I get tense and my legs just stiffen up and I can’t use them very well.”
Maynard said the Hall’s work ethic and dedication have been the key to her success and continued improvement.
“Emma noticed that the heat had taken its toll on the elite ranked throwers. As the competition continued she saw the opportunity to pass up the field,” said Maynard.
“Her conditioning paid off as she won the event by a half inch on her last throw. Emma has superior skill and was the only girl utilizing the spin technique in the shot put. As her strength and conditioning progresses she will gain great distance.”
Hall isn’t as big as the other throwers so she relies on her speed and technique. She credits Maynard’s coaching advice for her throwing styhle.
“(Maynard) told me since I’m shorter than most girls who do it, I had to rely mostly on speed and technique and that’s why I mostly spin instead of just standing there and throwing it,” said Hall.
“Most of the girls who I throw against in the discus can throw 110-feet just standing there. So, I have to get stronger and faster.”
Hall said she has always played softball and only went out for the track team in the seventh grade because her mother’s encouragement.
“I wanted to do track because my mom did track. I don’t like running a lot, so I didn’t know if I wanted to do that. (Her mother) said you could throw. They have throwing events. I said, ‘I didn’t know that.’ So, I looked into it and they had shot put and discus,” said Hall.
“Mr. Maynard told me that it would help me with softball. I thought I’ll do it just to improve (softball) and I got into it and I actually really loved it and I wanted to make it more than something to help me with softball.
Hall’s current distances rank her among the top 30 in the field of 100 who will participate in the nationals. Hall is working to hit the 120-foot mark to give her a better chance of winning the discus event.
“My goal right now is to at least get the top 16 out of this, but it would be great to get top 30. I want — when I’m older — to try out for the Olympics. Right now, I’m trying to get a good scholarship to go to college. My coach told me that (colleges) really look into nationals and you can get a really good scholarship if colleges notice you and they see you’re improving,” said Hall.
Maynard has not only been a big help coaching-wise, Hall said the two have a good understanding of each other that helps the workout process.
“He’s been a tremendous help. I don’t know where I’d be without him. He’s taught me everything I know. I wouldn’t be where I’m at now,” said Hall.
“There are other coaches, but he just teaches it in a certain way. He just works with me really well. The best part about it is he’s not just my coach, he’s my best friend. We have a similar personality so we get along really well. Whenever we’re practicing, we’re not dead serious. We can joke around a little bit and have fun.”
Emma has opened a donation account at www.gofundme.com to assist with the large travel expenses. It can be found in the search feature under Emma Hall, “Road to the Junior Olympics.”
Maynard is asking the public to “please support Emma as she works hard to make Ironton proud.”