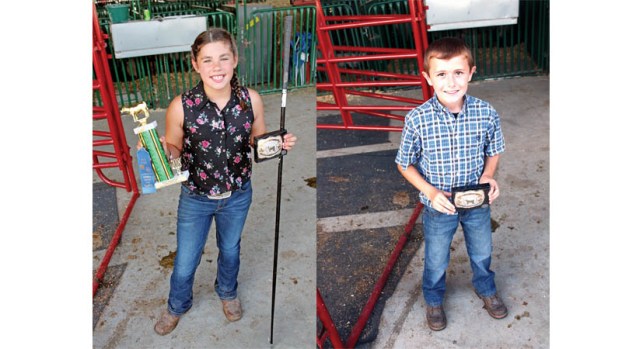 Left: Marley Ferguson, 9, of the Starlight 4-H Club, was the grand champion in the beef breeding category. Right: Seth Hamm, 9, of the Farm Hands 4-H Club, claimed the reserve champion title in the market feeders category.

ROME TOWNSHIP — The show ring at the Lawrence County Fair was packed Thursday evening, as 4-Hers showed off their animals in the dairy cattle, beef breeding, market feeders and feeder steers categories.

The dairy cattle show began the night, and with only two entries, both 4-Hers were able to take home prizes. This was also the first year dairy cattle have been part of the Lawrence County Fair in a number of years.

“It feels amazing,” Kaitlyn Harrison, 16, said of her grand championship win in the category. “I’ve raised her from a calf on a bottle, so she’s my little baby.”

In addition, Harrison, who is part of the Scottown Farmer and Farmettes 4-H Club, was also named the fair’s princess on its opening day, and handed winning 4-Hers their ribbons and trophies on the way out of the ring.

Taking the reserve championship title for the dairy cattle was Nicholas White, of the Collins Career Technical Center FFA.

“It feels really good to win,” he said. “I got third place in the breeding heifer show last year, but this is the first year they brought dairy cattle back.”

“It feels really exciting to win,” Ferguson said. “And this is my first year in 4-H, so I couldn’t believe it.”

“It feels really good, very exciting,” she said. “My grandpa has an angus farm, so I’ve pretty much been doing this my whole life.”

For the market feeders, 17-year-old Maddy Calaway, of the Getaway Go Getters 4-H Club and a student at Symmes Valley, won the grand champion title.

“Our family motto is ‘all the winning’s done at home,’ but it feels great,” she said.

Calaway said she has won grand champion for feeder steers in the past, but this was her first title in the market feeder category. She was also the senior showman winner as well.

The reserve champion for market feeders was Seth Hamm, 9, of the Farm Hands 4-H Club.

The last animal show of the night was feeder steers, in which two Symmes Valley students also won the top prizes.

“I’m pretty excited,” Klaiber said. “I’ve won reserve for lambs before, but have never been grand champion for this.”

Moore said that this being her first year involved with 4-H, claiming one of the top prizes was not something she was expecting.

Along with Calaway taking the senior showman award, the junior showman was claimed by Laura Hamm, 11, of the Farm Hands 4-H Club.

Judging the shows was Brent Tolle.

Last tobacco to be sold at fair today