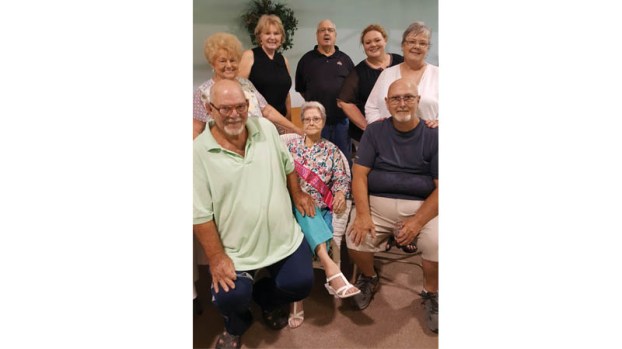 Family and friends turned out on Saturday to wish a happy 100th birthday to Babe Jones, center, of Proctorville.

Celebration draws family from across country

The Proctorville homemaker and mother of five children graduated from Rome Rural High School in 1937, the same year that a massive flood struck towns along the Ohio River.

Her children and grandchildren flew in from across the United States to be with her on the big day.

As part of the celebration, Jones received a proclamation from U.S. Rep. Bill Johnson, R-Ohio.

“According to those who knew her well, Mrs. Jones was an avid traveler of the United States and Europe, and loves quilting and listening to gospel music,” Johnson wrote. “However, Babe’s greatest passion is spending time with her family, who are very involved in her life.”
Johnson said Jones was joining an “exclusive club of centenarians who make up just 0.02 percent of the population in the United States.”

“Since her birth, she has lived through 18 presidencies, World War II, man landing on the moon and witnessed many technological innovations, such as the development of television, cell phones and the Internet.”

Johnson ended by expressing his hopes for her on the day.

“With great pride, I congratulate Babe Jones as she turns 100, and extend my best wishes to her for a continued happy, blessed and healthy life.”

Jones also received a certificate from the Lawrence County Commission recognizing her birthday.

Child abuse programming to get funding