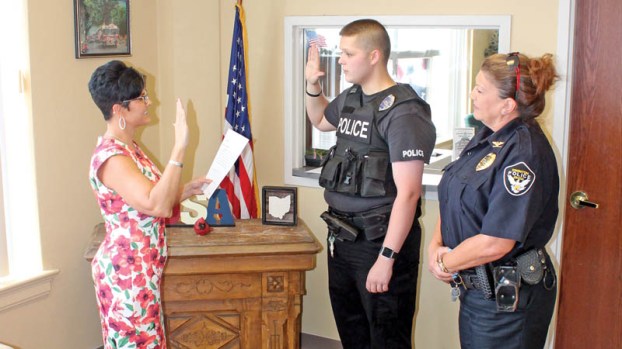 The Ironton Police Department now has a new officer after Mayor Katrina Keith swore Evan McKnight in on Monday.

“I’m very thankful. It’s been a long road,” he said of his journey to become an Ironton police officer. “I was in the second grade when I knew I wanted to be a police officer.”

McKnight, 21, has lived in Ironton his whole life and graduated from Ironton High School in 2015. He said he was in an incident when he was in the second grade when Ironton Policeman Anthony Forest came and assisted.

“He came and made everything a little better,” McKnight said. “So being a police officer has just stuck with me ever since.”

McKnight’s first day on the job was Monday, and said finally becoming an officer for the Ironton Police Department was “honestly overwhelming” after having the dream for so long.

Ironton Police Chief Pam Wagner said she was excited to add McKnight to the department.

“He scored very well on our civil service test; third place,” she said. “We expect him to be a valued asset to our police department and we welcome him aboard.”

Keith said she was also glad to be able to welcome McKnight to the department.

“We’re excited to have Mr. McKnight join our team,” she said. “We’re committed to protecting and serving the citizens of Ironton.

Prior to joining the Ironton police force, McKnight was an officer in the Village of Hanging Rock for almost a year.

“I’m just ready to serve the citizens of Ironton,” he said. “And hopefully do my part.”

With the addition of McKnight, the Ironton Police Department now has a total of 15 officers, with one chief, two detectives and 12 road units.

OSU season tickets to be raffled; Funds go toward children’s hospitals The public is invited to come out for a... read more