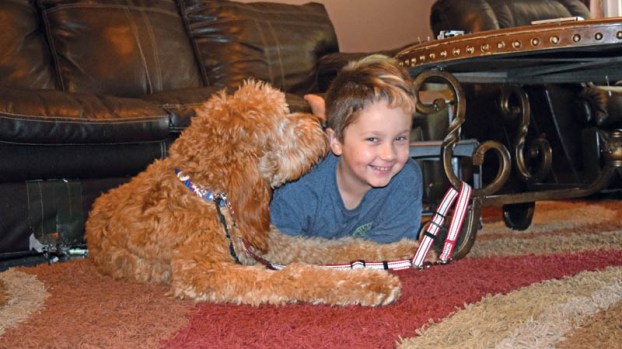 Rocky, a dog specially trained to sense when his owner David Jenkins’ blood sugar goes to high or too low, takes a small nap on Wednesday.

After months of waiting, David Jenkins finally got his dog this week.

But Rocky isn’t a pet, he is a service dog, with the job of notifying his owner if he’s about to have a diabetic attack.

David Jenkins, a second grader at Sugar Creek Christian Academy, was diagnosed with Type I diabetes when he was just 3 years old. That’s where Rocky comes in. Low and high blood sugar levels release chemicals in the body that have a distinct odor that is undetectable by humans, but dogs can smell it if the blood sugar gets below or above the normal 80 to 120 level.

The 10-month-old male golden doodle has been trained to alert David if his level goes above 150 by putting a paw on him before his blood levels get dangerously off so he has time to get it back to a healthy level.

“He can tell us about 45 minutes before an attack,” Richard Jenkins, David’s father, said. “That way, we can react before his blood sugar level gets to 300. If it gets that high, it can do damage to the body.”

Shanna Jenkins, David’s mother, explained that when the blood sugar gets that high, it acts like sandpaper in the vascular system and makes it weak until it causes leaks.

“So having this dog alert us will allow us to make adjustments,” she said. “So that is really going to add quality of life that David may not have been able to experience. He’s our security blanket.”

“He’s a nice dog,” David Jenkins said. “I like him. He helps save my life. I feel safer with him.”

“David is to keep him under command at all times,” Shanna Jenkins said.

Type I diabetes is an autoimmune disease. David’s pancreas quit producing insulin, and without insulin, he could die because the body doesn’t regulate sugar like it needs to.

So Jenkins has lived with constant pokes so his parents can monitor his blood levels. He gets insulin shots or has to wear an insulin pump. On each arm, he has a monitor that checks his blood sugar levels. Even with the continuous monitoring, there is a chance he could have an attack and be unable to tell his parents about it.

Shanna Jenkins explained that he can’t feel when his blood sugar is off.

“So, Rocky will alert David. If David doesn’t respond, he will alert me or Rich with a ‘go-tell’ by putting his paw on us,” she explained. “That means for us to go check on David.”

Rocky was trained in Las Vegas. The Jenkins would swab David’s mouth with a cotton ball when his blood sugar was too high or too low. The cotton balls were placed in a sealed container and frozen. Then they were sent off to the trainer so the dog would get used to David’s scent and learn to react to the smell of his blood sugar.

The dog arrived with the trainer on Monday and spent the day teaching David how to do commands.

“He’s had some adjustments,” Shanna Jenkins said of Rocky. “Not only is it a different time zone, the dog hasn’t seen rain before or this much grass.”

She said the dog spent his first night tethered to David’s bed, since his blood sugar levels can go off at any time. For diabetics like David, if they don’t wake up to treat it, they could slip into a coma or even die.

“There is something called ‘dead in the bed’ syndrome, it is from low blood sugar at night and no one alerts them or help them,” Shanna Jenkins said. “So, that’s where Rocky comes into play. He will be persistent and alert David until he wakes up. And if David doesn’t respond, he will come and alert me or Richard until we can come assist him.”

Rocky is on duty 95 percent of the day, Richard Jenkins said.

“He gets two play times a day, other than that he is working,” he said. And the dog cannot be treated like a pet and will only be fed on a schedule and petted only by David or when he does his job right. If they don’t follow a strict pattern, Rocky will get complacent and not do his job.

“If you don’t keep the dog calibrated, you just have an expensive pet,” Richard Jenkins said.

Even when the dog is just lying next to David Jenkins, the dog is working.

“If he senses that something isn’t right, he will wake up and alert him,” Richard Jenkins said. “It is called air sensing.”

Shanna Jenkins said the dog is a blessing for her son and she is thankful to all those who supported them in getting the canine.

Rocky cost about $15,000 and was paid for by a community volunteer effort called Team David for Doggone Diabetes that raised funds by holding various events like a benefit rides.

“They made this happen for David. In four months, they paid for Rocky. Our community did this,” Shanna Jenkins said. “And most of them don’t even know my son, but they cared enough to help and donate and volunteer to make this possible. We are just forever grateful to allow

David this opportunity. He is going to have a better quality of life, because of Rocky.”

The Jenkins have a new Facebook page called Defending David, which will chronicle David’s life with Rocky.