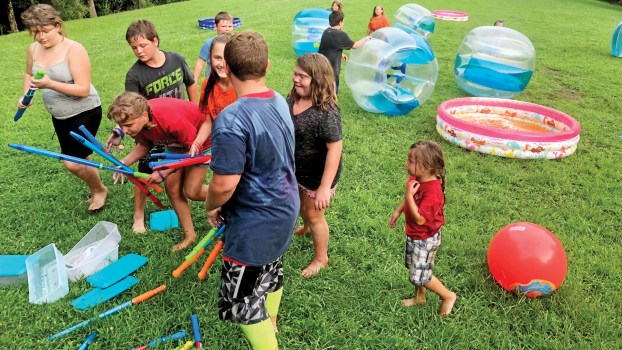 Submitted photo Camp G.R.A.C.E., organized by members of Getaway Community Church, is aimed at helping children of families dealing with the addiction crisis.

GETAWAY — A camp, dedicated to children whose families have fought addiction issues, hosted their second year of activities last month.

“I, as well as the church, knew that we could do more to help people with the opioid epidemic in our area, and we knew the best way was to help stop it before it ever started,” Berry said.

He said the camp began in 2017 on a $500 budget and organizers took children, whose parents are either fighting addiction or have done so in the past, to Spare Time, a swimming pool and to Billy Bob’s Wonderland in Barboursviile.

“Every day, we took them to a park, where we let them play when we first got there, and then we would share the Gospel with them,” he said. “We had 10 kids last year.”

This year, Berry said the group began soliciting help from other churches and trying to get volunteers to assist with the camp.

“We were able to raise over $3,000 and run our camp for an entire week of day camp and also run an overnight camp,” he said. “We doubled our number and were able to give them an action-packed week.”

Berry said the mission was simple:

“Share Jesus with them, and let them know that someone loves them, no matter what,” he said. “I wanted for us to be able to establish relationships with the kids so that they know there is a

God who loves them more than anything, and that there are people out there who care about them and want to help them break what can be a vicious cycle.”

He said, this year, they had help from Jeffersonville Baptist Church and IMPACT in Ironton, as well as teens from the Getaway church and a few other volunteers.

“We were able to give the kids a week to be a kid,” he said. “The churches that helped and the local businesses that joined in, they will never know the impact they made on these kids!”

He said this year’s camp included trips to Spare Time, Dreamland Pool in Kenova, Pump Up the Fun and Billy Bob’s. An overnight camp began on Aug. 1, with a stay at Camp Arrowhead and a visit to Waves of Fun in Putnam County, West Virginia.

“I am planning to start asking churches soon for help for next year again,” he said. “This is definitely a camp that takes a lot of planning and preparation for scheduling and trying to get all the pieces in place. “

He said he has plans to get the children together for events around Christmas.

“We have a great opportunity to help those in need and, most importantly, help change a life forever,” he said.