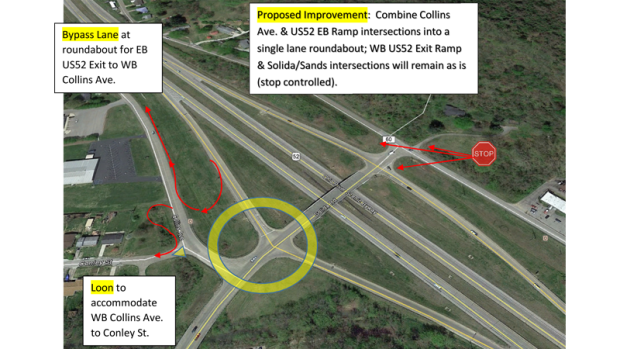 The Ohio Department of Transportation has begun work on the U.S. 52/Solida Road interchange in South Point and drivers can expect to deal with construction until the end of the year.

SOUTH POINT — The Ohio Department of Transportation has begun work on the U.S. 52/Solida Road interchange in South Point and drivers can expect to deal with construction until the end of the year.

More than 6,000 people a day use the interchange.

South Point Mayor Jeff Gaskin said there were no major issues with traffic on the first day of the closure on Thursday.

“I just came through South Point,” he said that afternoon. “There was increased traffic, but I didn’t see anything unmanageable.”

Gaskin said the village would monitor the situation and could make adjustments.

“We may need to modify signage a little bit,” he said.

He said he had also talked to Lawrence County’s 911 dispatchers and that no issues had been reported yet.

The $1.6 million project will turn the interchanges of intersections on Solida Road, U.S. 52, the eastbound ramps and Collins Avenue into a single roundabout.

Solida Road will be closed until Dec. 31 between the U.S. 52 eastbound interchange ramps and Collins Avenue at South Point for the intersection improvement project. While the route is closed, motorists will be detoured via either Macedonia Road or Grandview Avenue and County Road 1. The westbound interchange ramps will remain open to vehicles traveling north on Solida Road.

The construction will fix the problem of a combination of closely spaced intersections along Solida Road in the interchange area and heavy traffic along Collins Avenue that makes for undesirable traffic operations.

A loon, which is pavement outside of the normal traffic lanes to allow for larger vehicles to safely make a U-turn on a divided roadway, will be constructed to accommodate residential traffic from westbound traffic on Collins Avenue, destined for Conley Street.

The Lawrence County Health Department is continuing to fight a rising number of cases of hepatitis A as the county... read more